From Seattle to Paris Wendy spreads the gospel of Chicago based blues piano and boogie woogie. She’s well steeped in the stylings of Otis Spann, Memphis Slim, Sunnyland Slim and Albert Ammons - the greats of boogie and blues, and honed her skills working with contemporary artists Steve Freund, Otis Rush and the late Hank Ballard who’s love of the blues showed in all of his rock classics.

Wendy has appeared with Charlie Musselwhite, Otis Rush, and Etta James and has been featured at Berkeley’s historic venue, Freight and Salvage.  She performed at the Cincinnati Blues Fest at the internationally acclaimed Arches Piano stage, headed to Boston with Hank Ballard and the Midnighters for a performance at the Boston Symphony Hall and played before a sold out audience at the San Diego Museum of Art with Hadda Brooks in what proved to be one of Hadda’s last shows.  Wendy has performed at many major festivals including Peer in Belgium, San Francisco Blues Fest,  and Monterey Blues, and Jazz Fests.

Solo or with her band Wendy puts on a high energy show. Material is either written by Wendy or reinvented in her style and delivered with passion. Wendy is afraid of no guitar player and has opened solo for Jimmy Thackery and the drivers and Deborah Coleman.

Take a Little Walk With Me

“ Heavyweight guitarists such as Steve Freund and Dave Workman will attest to Wendy’s extraordinary ability at the 88’s, as did the late Rock & Roll architect, Hank Ballard...Wendy’s vocals are natural and unaffected, ...her piano work is of the first order...”

“ ..DeWitt is a sweet-voiced chanteuse with a strong reliance on jazz phrasing and inflection.  Her piano style is based on those of Otis Spann, Albert Ammons and other blues masters, and she tears it up on the closer, “Chupacabra Boggie Woogie”…”

Steve Freund’s  C is for Chicago 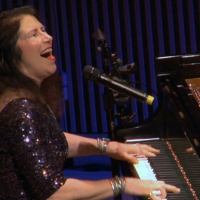 All About Jazz musician pages are maintained by musicians, publicists and trusted members like you. Interested? Tell us why you would like to improve the Wendy DeWitt musician page.