The Real Group is a Swedish vocal group with five dedicated singers and musicians. The group has been touring for more than 30 years and continues to excite a broad audience all over the world. With a unique musical expression in a field between jazz, pop and Northern European choral music, The Real Group is considered one of the leading forces in the world of vocal music.

The Real Group was formed in 1984 by five students at the Royal Academy of Music in Stockholm. The original members were eager to explore the artistic world of vocal music with an emphasis on jazz, pop and folk music. The group quickly gained an international audience and has grown to become one of the cornerstones of modern a cappella. Today the legacy of The Real Group is maintained and further developed by worldwide concert tours, recordings, educational mentoring and published scores. The mentorship has evolved over the years and continuously seeks to integrate artistic aspirations with human rights, ecological awareness, global concern and a feministic mindset.

The organization is today owned and managed by Margareta Bengtson, Anders Edenroth, Katarina Henryson and Peder Karlsson. Anders Jalkeus is no longer a part of the organization and has had no connection with the artistic or educational work of The Real Group since 2015. 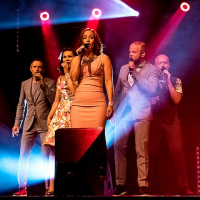 All About Jazz musician pages are maintained by musicians, publicists and trusted members like you. Interested? Tell us why you would like to improve the The Real Group musician page.