Keyboardist Scott Kinsey is known for many things — being a close friend and protege of the late Joe Zawinul, an integral member of the iconic fusion band Tribal Tech and pushing subsequent boundaries with his adventurous groups Human Element, the Zawinul Legacy Band and ARC Trio. In a continually evolving career, Scott’s operational motif is embodied by the word “exploratory.”

Enter vocalist, songwriter and electric bassist Mer Sal (Meridith Salimbeni), a Coloradan with a fresh presence on the LA scene who spent years honing her songwriting, vocal and performance craft while fronting bands around the West to rave reviews. Through a series of recent (and fortuitous) introductions to top players and producers, Mer was invited to participate in The Native Dancer Series: A Tribute to Wayne Shorter and Karl Sterling’s Dream: Parkinson's Global Project. Both of these projects saw her performing along with many other top-shelf musicians, including Jimmy Haslip, Peter Erskine, Nir Felder, Gary Novak and Jeff Richman.

Mer and Scott first crossed paths on one of these sessions and there was something of an instant connection between the two. After their initial meeting they kept in touch, exchanging lyrical and musical ideas. Mer continues, “I sent Scott the beginnings of a song, which he arranged and reharmonized. When I returned to LA to live, he played it for me. It blew my mind, it was so incredible — and incredibly thoughtful.” It’s that uncommon connection and synergy that fires the collaborative and creative union between the two, the fruits of which come through on Adjustments.

Part of the mojo transmitted on the album owes to the individual musical path each has taken and the different processes they have developed to achieve their respective musical ends. They also seem equally taken by the other’s abilities. “It’s interesting,” Kinsey says, “because she writes all this poetry — pages upon pages of text. I look at it and say, ‘There’s no song there.’ But when I ask what she has in mind, she starts singing and I can’t believe it, it’s totally there… a melody, a direction, a concept… everything.”

Sal concurs: “I’m a poet, but I’m equally a singer, so the melody comes out hand in hand with the lyrics. I usually hear some sort of harmonic background to the melodies while I’m writing but now that I know what Scott does with them, I try to come up with melodies that lend themselves to Scott’s process. I love hearing him ‘Scottify’ them.”

Kinsey adds, “She has a full song there — melody, lyrics and chords — but I actually don’t want to hear the chords; I don’t want them to influence what I might do. I want to keep my freshness, with the melody and the lyric and that’s it. This gives us individual roles to play. She comes up with the lyrics and the melody, then I can put my thing to it.”

One might think that Kinsey, with a background steeped in instrumental, soloing-oriented music, would have altered his approach for the album’s song-based collaborations. “To me it’s not really that different.” Kinsey explains. “I still say, what is the melody, what is the story — just as I would with a saxophone player or guitarist — and write around that.” But Scott readily admits that having Sal in the mix sparks different inspirations. “It’s because of her voice. I love orchestrating around that and end up writing more harmony. With busier instrumental records, the music is already dense. But with Mer’s voice I can hear all this lush stuff going on around it.”

The fact that Adjustments displays some of Kinsey’s most innovative writing, playing and arranging to date may indeed owe to having Sal as talented muse, but it’s also the singer’s authenticity that effectively grounds Kinsey’s work like never before. Her original songs, such as the opening “Tiny Circles,” display a certain valiant fearlessness for a songwriter whose emotions run so palpably close to the surface. “I recorded that in my studio in Colorado and it was the first one I sent to Scott. I felt that in my life, I was walking in tiny circles instead of the bigger ones where I wanted to be. It’s kind of admitting my shame — so I could get through it.”

But even when the pen presses hard lyrically, it’s not only taken aloft by Sal’s engaging vocals but by Kinsey’s (sometimes counterintuitive) treatments: “I had a general concept that if it’s a very, very dark lyric, I won’t enhance it with more darkness. I don’t want it to sink deeper into that pit but keep it afloat by lightening it up. Just like I might put slightly darker things around a really happy lyric or melody — enhance it by pulling it the other way a bit.”

This symbiosis also carries over into the duo’s wonderfully creative takes on some classic (if not surprising) cover material on the album. Steely Dan, The Beach Boys, even Blondie’s “Heart of Glass” — (Kinsey’s an unapologetic Blondie fan) — all are freshly reimagined by the pair. Perhaps none of these are more emblematic of the Kinsey/Sal union than the wonderful joining of Joni Mitchell’s “Down to You” with Weather Report’s “Jungle Book” — something of a talisman and surely among the album's high points.

The icing on the cake for Adjustments is undoubtedly how the proceedings are further raised by having so many of the sought-after, A-list musicians of Kinsey’s world (e.g., Scott Henderson, Oz Noy, Tim Lefebvre, Hadrien Feraud, Gergö Borlai and others) uncommonly colliding with Sal’s. This propels the music beyond today’s retrograde “jazz vocalist” albums that seek to rekindle nostalgia for the singer- fronted jazz band. Nor is it another in the recent stream of barely distinguishable, vocal-forward, jazz/neo-soul hybrids that proliferate in the modern soundscape.

In their own way, what Scott Kinsey and Mer Sal exhibit on Adjustments speaks to an intersection as uniquely compelling as when Jaco met Joni. A modern entity, to be heard on its own terms. Says Mer, “We want to change what’s considered the norm a little.” And in light of the music that she and Scott have brought forth here, listeners will happily make their own “adjustments.” Show less 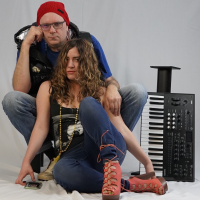 All About Jazz musician pages are maintained by musicians, publicists and trusted members like you. Interested? Tell us why you would like to improve the Scott Kinsey, Mer Sal musician page.