“Saul is a consummate musician, a person who is aware of the feelings of others and a person who is gentle in that sense. He is everything I could ask for in a bandmate.”– SONNY ROLLINS

“Saul has it all together and is a positive force in the world of the guitar. He plays hip melodies, which he’s totally in touch with when improvising. His harmonies, both with his impeccable comping and chord soloing, employ refreshing voicings, and certainly keep the listener involved. – GENE BERTONCINI

His last album as a bandleader aptly entitled, Zeb’s House, is a tribute to the community of great artists, showcasing both his irrepressible sense of humor as well as his signature gritty, purposeful, urbane sensibility, throughout a mix of both originals and standards. Show less 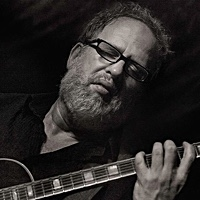 All About Jazz musician pages are maintained by musicians, publicists and trusted members like you. Interested? Tell us why you would like to improve the Saul Rubin musician page.