Raphael Fusco is an award-winning pianist, harpsichordist, and organist active throughout the United States and Europe. He has performed with world-class artists and ensembles including Branford Marsalis, Daniel Rowland, American Ballet Theatre, Martha Graham Dance Company, Chamber Orchestra of Philadelphia, Gotham Chamber Opera, and members of the New York Philharmonic and Metropolitan Opera Orchestras. He has appeared in renowned venues throughout the US and Europe such as Carnegie Hall, Metropolitan Museum of Art, Le Poisson Rouge, The Kimmel Center, Detroit Institute of Arts, Tuscia Opera Festival (IT), Teatro degli Astrusi (IT), and St. Bavo Church (NL).

In 2015 and 2013 the Piccola Academia di Montisi awarded Raphael two artist residencies where he had the rare opportunity to study and compose on one of world's finest collections of antique keyboard instruments. He is a founding member of the period instrument consort Corelli Collective and the Thum-Fusco Piano Duo. He is the former principal organist at the historic Convent Avenue Baptist Church in New York City.

Mr. Fusco has served on the piano, music history and chamber music faculties of Seton Hall University, Mahanaim College and Turtle Bay Music School. He is currently a Senior Artist on the faculty of the Universität für Musik und darstellende Kunst in Graz, Austria. 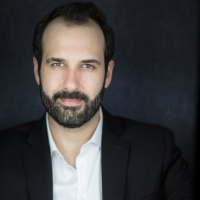 All About Jazz musician pages are maintained by musicians, publicists and trusted members like you. Interested? Tell us why you would like to improve the Raphael Fusco musician page.