PATTY WATERS must be acknowledged as a vocalist who has tested the limits of the human voice's capabilities. Since her brief recording career in the mid-'6O's, she has come to be appreciated as a vocal innovator not just in jazz but in contemporary music as a whole. Much of her repertoire was given over to hushed piano solo ballads in which her voice could fade to a whisper that was barely audible, but what really attracted attention were her avant-garde outings in which she stretched and mutated her voice with contorted shrieks and wails that could be downright blood-curdling. She was heard in a nightclub in the early '6O's by Albert Ayler, who recommended her to the ESP label; the first side of her 1965 debut recording ("Sings") was given over entirely to self-composed solo piano miniatures, leaving listeners somewhat unprepared for the second side, which consisted solely of her 13-minute interpretation of "Black Is the Color of My True Love's Hair." Building into hair-raising screams and vocal improvisations, it remains the performance for which she is most noted. Sadly, she only recorded one more album, the live "College Tour," just a few months later; a more determinedly avant-garde effort than her debut, it featured entirely different, mostly self-composed songs. Ms. Waters often eschewed words altogether for wordless moan-scats and wails, and opted for a fuller band backing, including appearances by pianists Ran Blake and Burton Greene. Aside from a subsequent appearance with Marzette Watts's ensemble on a 1968 LP, nothing further was heard from her on record until 1996, as she withdrew to Hawaii to raise her son (born in 1969) and sang in public only sporadically for many years. She sang in the Monterey Festival of 1999 and in 2003 at New York City's Vision Festival and the Tolbooth Festival in Scotland, and in 2006 she toured in Belgium and Paris with the great bassist Henry Grimes. Patty's mystique has been enhanced over the decades by the rarity of her two ESP discs, recently reissued on CD in Germany. Diamanda Galas names Patty Waters as her biggest influence, and she is also publicly revered by Christina Carter and Patti Smith. Patty Waters now lives in Santa Cruz, California and very much wants to continue with her music life. Patty Waters can be reached at [email protected] [NOTE: This updated biography is based on one written by Richie Unterberger for "All Music Guide." The photo above is by Will Wallace.] 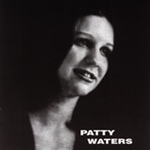 Happiness Is A Thing...

All About Jazz musician pages are maintained by musicians, publicists and trusted members like you. Interested? Tell us why you would like to improve the Patty Waters musician page.