A native of Denver, Colorado, Patricia grew up in Carlisle, PA, where she began her music education studying voice and piano, and composing at an early age. By the age of 6, she began performing and singing in musicals and theatrical productions. In 1974 she enrolled at University of North Carolina School of the Arts (UNCSA) where she studied opera and continued piano studies and composing, when she met Orlando. Fluent in Portuguese, Patricia has journeyed to Brazil regularly for the past 30 years. She is a versatile and fluent pianist, a singer with a 4-octave range, and a prolific songwriter whose compositions are marked by a lyrical and sensuous style.

In addition to composing and recording for Minas, Patricia has written and published a book, La Giara (The Water Jug), from which she created a musical inspired by the story of her Sicilian family’s emigration to America. 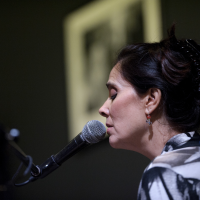 All About Jazz musician pages are maintained by musicians, publicists and trusted members like you. Interested? Tell us why you would like to improve the Patricia K Haddad musician page.