Ottilie Patterson is a blues singer best known for her performances and recordings with the Chris Barber Jazz Band in the late-1950s and early-1960s. The vocalist Patterson joined in 1954 the Chris Barber band when she was Barber's girlfriend, (they married in 1959). Aided by remarkably consistent personnel, the Barber band was soon one of the UK's leading traditional groups and was well placed to take advantage of the surge of interest in this form of jazz in the late 50s and early 60s. Barber experienced a "freak" hit in the pop charts in 1959 when his arrangement of Sydney Bechet's "Petite Fleur" became a huge hit (No. 3 in the UK).

Anna Ottilie Patterson was born in Comber, County Down, Northern Ireland on January 31, 1932. She was the youngest child of four. Her father, Joseph Patterson, was from Northern Ireland, and her mother, Jūlija Jgers, was from Latvia. Both sides of the family were musical, and Ottilie trained as a classical pianist from the age of eleven, but never received any formal training as a singer.

In 1949 Ottilie went to study art at Belfast College of Technology, where a fellow student introduced her to the music of Bessie Smith, Jelly Roll Morton, and Meade Lux Lewis. In 1951 she began singing with Jimmy Compton's Jazz Band, and in August 1952 she formed the Muskrat Ramblers with Al Watt and Derek Martin.

In the summer of 1954 while holidaying in London Ottilie met Beryl Bryden, who introduced her to the Chris Barber Jazz Band.

She joined the Barber Band full-time on January 1, 1955 and her first public appearance was at the Royal Festival Hall on January 9, 1955. Between 1955 and 1962 Ottilie toured extensively with the Chris Barber Jazz Band and issued many recordings: those featuring her on every track include the EPs Blues(1955), That Patterson Girl(1955), That Patterson Girl Volume 2(1956), Ottilie(1959), and the LP Chris Barber's Blues Book(1961); she also appeared on numerous Chris Barber records.

From 1963 or so she began to suffer throat problems and ceased to appear and record regularly with Chris Barber, officially retiring from the band in 1973. During this period she recorded some non- Jazz/Blues material such as settings of Shakespeare (with Chris Barber) and in 1969 issued a solo LP 3000 years with Ottilie which is now much sought by collectors.

In early 1983 Ottilie and Chris Barber gave a series of concerts in South London which were recorded for the LP Madame Blues and Doctor Jazz(1984).

This is her most recent issued recording. 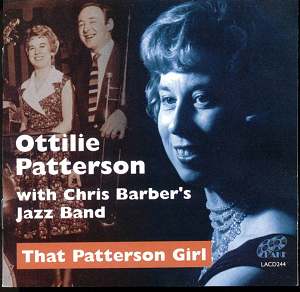 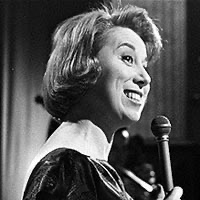 All About Jazz musician pages are maintained by musicians, publicists and trusted members like you. Interested? Tell us why you would like to improve the Ottilie Patterson musician page.