Having grown up in Minnesota, Mike Rivard moved to Boston in 1981 to attend The Berklee College of Music, where he studied both electric and acoustic basses as well as composition. During this time he also studied privately with the renowned jazz improv teacher Charlie Banacos. Rivard cites amongst his main influences Dave Holland, Bootsy Collins, James Jamerson, Colin Moulding, Charlie Haden, Michael Henderson, Charles Mingus, Mick Karn, Gnawa Music, Tony Levin and John Wetton. A scholarship in 1986 led to his studying with Dave Holland at the Banff Center for Fine Arts, and subsequently purchasing one of Holland's acoustic basses. Russ Gershon, whom Rivard had met in a Berklee class devoted to the music of Charles Mingus, was impressed with his playing of several Mingus solo transcriptions and invited the bassist to join his 11-piece jazz ensemble, the Either/Orchestra, in 1986. During his three-year tenure the band recorded three albums and toured throughout the east and midwest, during which time he began a long friendship with then-E/O keyboardist John Medeski. Through his association with the E/O he also met Mark Sandman and joined his band, Hypnosonics, as well as guesting on several Morphine CDs.

In 1989 he joined the Walkers, who signed with Atlantic Records after a fierce bidding war. Alas, no album was ever released and the band broke up, and important lessons about the industry were learned. By this time he had become well-known in the Boston/NYC area and had begun a long association with the Indo-jazz group Natraj, touring India and Africa and recording several CDs with the band. Through his association with Natraj he played with Ghanian master drummers Godwin Agbele and Dolsi-Naa Abubakari Lunna (studying with them as well), South Indian chitraveena player Ravikiran, bansuri player Steve Gorn, and others.

Being equally at home on both electric and acoustic basses, he became sought after for studio and live work and began to add to an already impressive resume that included Aimee Mann, Bruce Hornsby, Jon Brion, Cab Calloway, Mighty Sam McClain, Peter Wolf, Guster, the Velvet Underground's Mo Tucker and Paula Cole. Possessing a musical aesthetic that did not discriminate against any musical style, in addition to his work in the rock and pop fields he pursued interests in world music with the West African bands Oyie and Mamma Tongue, and jazz and avant garde music with Joe and Mat Maneri, Bob Moses, Vernon Reid, and others.

In the early 90s he began long associations with Jen Trynin (with whom he recorded one album for Atlantic), and The Story, a folk-pop duo consisting of Jonatha Brooke and Jennifer Kimball. Touring nationally and internationally and recording three CDs with The Story, he continued to work with both Brooke and Kimball after the demise of the band. The popularity of The Story led to a good deal of work with other folk artists including Shawn Colvin, Patty Larkin, Dar Williams, Catie Curtis, Lori McKenna, Kris Delmhorst, and others.

Seeking an opportunity to showcase his interest in combining jazz, dub, electronica, world music, rock and hip hop, he started his own band in 1998 called Club d'Elf. The only permanent member, Rivard forms the core of the group along with drummers Erik Kerr or Dean Johnston, Moroccan oud player and percussionist Brahim Fribgane, and turntablist Mister Rourke. The band has garnered an impressive reputation in the underground scene in the northeast, and has traveled as far away as Tokyo. Calling upon friends and contacts acquired through Rivard's many years on the scene, guests have included Sandman, Medeski, DJ Logic, Kenwood Dennard, Marc Ribot, Marco Benevento and many others. Over the course of its nine years of existence the band has released seven live double-CDs, and in 2006 its first studio disc, Now I Understand.

Knowing him to be a longtime fan of the music of North Africa, Sandman gave Rivard Hassan Hakmoun's CD Gift of the Gnawa, which led to the bassist falling in love with the sound of the Moroccan sintir, a three-stringed bass lute with a camel-skin top that Hakmoun calls "the 1,000 year-old bass". Acquiring one in 2002, he set about teaching himself to play the instrument, guided by help from band mate Fribgane and Hakmoun, as well as other Gnawa musicians he came in contact with. Today he is among a handful of western musicians who have reached a high level of proficiency on the instrument, and has added it to his arsenal of other basses.

In addition to his busy freelance schedule and leading Club d'Elf, Rivard has done extensive work in musical theatre, touring with the national company of The Lion King in 2004 and 2005, and playing in Boston for national tours of Wicked, Rent, and others. In 2005, he was the Bassist In Residence at Jacob's Pillow in Becket, MA (performing with the Ben Munisteri Dance Company), and has also performed with the Boston Pops.

"Rivard saves his best for last, closing with a head-twisting bonus version of “Shadow's Shift” in which his fingers dance upon the bass the way James Brown glides (well, used to glide) across the Apollo floor. Here his bass surveys the roaring funk of Larry Graham, the innovative fire of Tony Levin, the precision of Ron Carter, and the sheer audacity of Jaco Pastorius. You won't hear more bad-ass bass playing anywhere else...and I am glad, grateful even, to be among some of the first to hear it!" —Chris M. Slawecki, AllAboutJazz.com, reviewing Club d'Elf Athens, GA 3/28/03 Show less 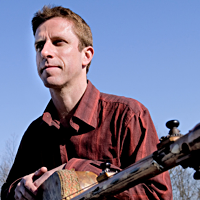 All About Jazz musician pages are maintained by musicians, publicists and trusted members like you. Interested? Tell us why you would like to improve the Mike Rivard musician page.