Get a good sound, swing hard and play the bass like a bass.

So says Michael Ross about his one and only instrument: double bass. Ross has been living those words for some 37 years, and speaks them with conviction as his fourth album, Ginger, is released.

Ginger is a tight 41 minutes of top-quality, (mostly) acoustic jazz. Ross is joined (in quintet, quartet and trio settings) by a stalwart lineup of players that include some of the best in Florida and elsewhere: saxophonist/flutist Danny Jordan, pianist William Evans, guitarist LaRue Nickelson and drummer Walt Hubbard.

Ginger puts Ross’ bedrock musical qualities on vivid display: his far-reaching talents as a composer; an ability to incorporate his own playing, a sublime blend of muscle and fluidity, into an ensemble concept; and, when called for, to take center stage as a fleet and inventive soloist. Through it all, Ross never loses track of his instrument’s primal function — to provide the bass, the bottom end.

Ross mined his most lyrically melodic side for a large portion of the program: The ballads “Mahatma” and “Ginger” and the samba-esque “Life of Riley” are all unabashedly gorgeous tunes. “Cone of Uncertainly” showcases a stately classical vibe. A piano-trio treatment of “I Got It Bad (And That Ain’t Good)” is slow and probing. Ross and company get unruly on “Yak Attack,” a frenetic workout that calls to mind Jack Johnson-era Miles Davis (with Evans moving to Fender Rhodes).

The bassist started out in a garage band. It didn’t last. After logging a few months playing blues-rock tunes with his cousins in his hometown of Harrisburg, Pennsylvania, Ross fell under the thrall of jazz. By age 17, “I did not want to double on electric,” he recalls. “I wanted to be a specialist. I loved the sound, the smell, the feel, everything about the upright bass. I guess it was my version of rebel without a clue.”

By his senior year in high school, Ross was gigging regularly in a Harrisburg piano trio and, on Thursdays and Fridays, traveling three hours each way to New York to study with Cecil McBee. At night, he’d hit the jazz clubs before sleeping on the floor of a friend’s dorm room at NYU. (During that time, Ross even had a couple of pleasant conversations with Charles Mingus.) He also began to write. “When I was in high school, a guy taught me composition by having us work together on a string quartet,” Ross says, still bemused by the idea. “But at heart, I’m a songwriter.”

Urged to study classical bass, Ross migrated to Tampa, where he matriculated at University of South Florida, “taking nothing but music courses,” he says. “I treated it like a conservatory, without regard to trying to graduate.”

Soon, he was making decent money playing jazz and pop on local stages. At 20, he scored a gig with guitarist Nathen Page and played all over the South.

In the ensuing years, Ross has made himself a fixture on the Florida jazz scene. A pivotal moment in his career occurred in the early 1980s when he joined, and soon led, Liquid Bebop, one of the most formidable jazz units to ever call Tampa Bay home. During its nearly two-decade tenure, the band featured such top-tier players as saxophonists David Pate and Mickey Wells, pianist Chuck Owen, percussionist Gumbi Ortiz and drummer John Jenkins. Liquid Bebop specialized in the jazz repertory, and would play concerts featuring work by such luminaries as Miles, Monk, Mingus, Bill Evans and others.

As the new millennium approached, Ross sought a more active outlet for his own composing. In 2000, The Michael Ross Quartet — with Pate, Nickelson and either Hubbard or Tom Carabasi on drums — released Doghouse. It was followed by two more critically lauded discs, Dog Eat Dog (2002) and Year of the Dog (2004). Ross and Nickelson shared composing duties in a series that Ross calls his “Dog Trilogy.”

“A bedrock melodist in much the same manner as Charlie Haden, possessing a dark, sustaining tone…, and his compositions are both thoughtful and swinging” Cadence 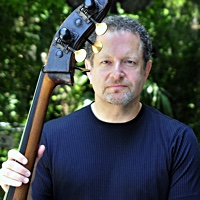 All About Jazz musician pages are maintained by musicians, publicists and trusted members like you. Interested? Tell us why you would like to improve the Michael Ross musician page.