Why has this musician who recorded over two hundred sides and was well-loved by the Black blues audiences of the '30s and '40s been comparatively ignored by later audiences? Perhaps it's because Memphis Minnie doesn't fit the myth of the young, tragic, haunted blues singer and she is too complex of a character to be easily marketed. She shaped a life very different from the limited possibilities offered to the women of her time. She lived a long life, was at her best in middle age, and would spit tobacco wearing a chiffon ball gown. Memphis Minnie's music remained popular over two decades because it was lyrically and instrumentally in tune with the lives of Black Americans. It remains vital and influential today because of her inventive, rhythmic guitar playing and her songs, which capture people and events and bring them to life across the years. In terms of her influence on the development of blues, she was an important player in the Chicago clubs during the '40s when musicians like Muddy Waters, Jimmy Rodgers and Johnny Shines, were coming up.

Lizzie Douglas was born before the turn of the century in Algiers, Louisiana, close to New Orleans. By the year 1910 she had learned to play the banjo and guitar and had run away from home and joined the Ringling Brothers circus, where she performed in tent shows throughout the Southern states into the 1920s. By 1929, Douglas had married another guitar-player, Joe McCoy, who was a good singer and guitarist. Minnie and Joe began a steady series of recording dates in New York, and Memphis, first for Columbia, later for Vocalion, Decca, Okeh and Bluebird. Kansas Joe,and Minnie were guitarists of equal ability, and the interplay of their instruments is like a great conversation: with both of them switching between treble and bass. Minnie was quick to embrace the latest technologies in order to be heard above the crowds She was one of the first blues players to use a National in 1929, and to play an electric wood body National and various electric guitars in the '40s and '50s.

Joe and Minnie based themselves in Chicago throughout the early '30s, playing clubs like the DeLisa and the Music Box, recording both together and separately. Their marriage and musical partnership fell apart in the mid-thirties, around the same time Minnie became increasingly featured as a guitarist, vocalist and songwriter.

In 1939 she married Ernest "Little Son Joe" Lawlars, a Memphis based guitarist who was her partner for the next 23 years. Her recordings with Son Joe are in duet style, with piano, bass or drums added on some sessions. She moved to Chicago in the early forties and went in partnership with famed blues musician St. Louis Jimmy with whom she operated a blues club in Indianapolis, Indiana. She did sessions for Vocalion and Okeh and some of her better known records were " Bumble Bee," "Black Cat Blues," "Me And My Chauffeur," and "In My Girlish Days."

In late 1947 she recorded with Blind John Davis on piano with the tunes "Three Times Seven Blues" and "Shout The Boogie" on Columbia. "Daybreak Blues" and "Million Dollar Blues" was released the following year. In 1949 "Jump Little Rabbit" and "Tonight I Smile On You," was issued followed later in the year by "Tears On My Pillow" and Sweet Man." Even though sales of their recordings slowed down by the end of the forties, their audience remained available to them in the clubs. Styles were shifting toward jump blues bands and by the mid '50s the record industry had changed irrevocably with the fabrication of rock and roll. The major labels pulled out of the blues market, and Minnie's last recordings were for Regal in 1949.

By 1950 she was still a draw in the Midwest, and she was one of the top selling artists for the Regal label that spring. Memphis Minnie continued to play club dates in Chicago and Detroit in 1951, but late in the year returns to Memphis. In early 1952 in that city she records with Lil' Son Joe & his band which includes Joe Hill Louis for the Checker record label. The sides were never released.

By the year 1955, Minnie had returned to Memphis and retired from the music business. Lil' Son Joe passed away in 1962 and soon Minnie became ill and battled various ailments until she passed away in August of 1973 in her adopted home town.

Although Memphis Minnie is gone, her music is still full of life, and her influence can be heard in the music of the many Chicago blues players who came up during her reign in the thirties and forties. Her guitar playing embodies the best of blues: it takes a simple form and makes each interpretation fresh and inventive. She was among the first musicians to be inducted into the Blues Foundation Hall of Fame, in 1980. 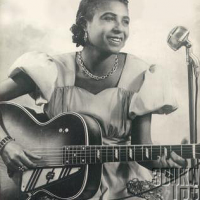 All About Jazz musician pages are maintained by musicians, publicists and trusted members like you. Interested? Tell us why you would like to improve the Memphis Minnie musician page.