After 20 years of gradually building his rep as a reliable and versatile sideman on the Orange County, California circuit, guitarist Matthew Von Doran is finally stepping out as a leader in his own right with In This Present Moment. Produced by Jimmy Haslip, bassist with the internationally renowned Yellowjackets, this debut outing from Von Doran finds the guitarist surrounded by a cast of jazz heavyweights including saxophonists Bob Mintzer and Bob Sheppard, drummers Peter Erskine, Terri Lyne Carrington, Gary Novak and Marcus Baylor, B-3 organist Larry Goldings, bassists James Genus and Haslip himself. An impressive showcase that highlights Von Doran's warm, inviting tone and accomplished six-string work in a variety of settings, In This Present Moment is a fitting introduction to this new face on the post-Metheny/post- Scofield guitar landscape.

"The record has a nice eclectic mix but it's not too all over the map," says Von Doran in addressing his own eclectic nature as a guitarist. From the hauntingly melodic opener "Balance" to the earthy N'awlins flavored funk of "Measure Once" to the fervently swinging "Critical Mass," sparked by the ace rhythm tandem of bassist Genus and drummer Baylor and featuring a killing tenor solo from Mintzer, Von Doran still covers a lot of bases stylistically on In This Present Moment, showcasing a fluid linear approach and rich chordal voicings along the way. Organist Goldings adds a thick B-3 cushion underneath the aptly-named "Swang," which is fueled by the briskly swinging, interactive pulse of Carrington on the kit and culminates in some heated trading between organ and guitar. That potent organ trio also appears on the breezy, Latin flavored "Z" and the more ethereal "Ex Nihilo."

Producer Haslip appears alongside his Yellowjackets bandmate Baylor on the challenging, post-boppish vehicle "Vanity Strikes," which also features a burning solo from vibist Roger Burn. Former Chick Corea Elektric Band drummer Gary Novak provides the slamming backbeat on the powerful groover "Cable." And for a radical change of pace, Von Doran also pulls out his 11-string nylon string fretless Godin guitar on the provocative "Trick," which is underscored by some adventurous interplay between bassist Olesczkiewicz and drummer Erskine. Von Doran closes the collection in poignant fashion with the melancholic acoustic guitar ballad "Somewhere Before," which features some sensitive brushwork from Erskine and is also highlighted by a beautifully expressive solo upright bass intro by Darek "Oles" Olesczkiewicz.

From opener to closer, there's not a weak link on In This Present Moment. It's a strong first statement for this guitar talent deserving of wider recognition.

Born in Germany in 1960, Matthew Von Doran grew up in Washington D.C., and Canada before the family finally settled in the Manhattan Beach area of Los Angeles County. The youngest in the family, he came under the musical influence of his older siblings, who exposed him early on to the sounds of the '60s and '70s. "I have a typical guitar player background," says Von Doran. "I started off in rock, listening to everything from the Beatles and Jimi Hendrix to Black Sabbath, Zeppelin and Aerosmith to Peter Frampton, Elton John, James Taylor and Crosby, Stills & Nash. So I was always into a fairly eclectic mix of things."

Von Doran began playing guitar at age 15 and by the time he got to college, in 1978, he started checki n

g out jazz. He recalls one particularly significant turning point in his musical direction at that time. "At the junior college I was going to I saw Emmett Chapman, the guy who invented the Stick. He played a noontime concert, which was pretty amazing, and he did a tune off the Mahavishnu Orchestra's first album, Inner Mounting Flame. I think it was 'A Lotus on Irish Stream.' And this tune was so beautiful that I went out and got that record, and that was it for me. As a beginning player I was intrigued by all the chords that were very challenging to play in jazz. And this Mahavishnu album had all that quality but it also appealed to my rock sensibilities."

Swept away by the fusion movement, Von Doran soon became exposed to other important guitar influences, including Al Di Meola, Pat Metheny, John Scofield and Bill Frisell. And his search only led him deeper into jazz. Following stints at Citrus College and Mt. San Antonio College, he enrolled at the Guitar Institute of Technology (GIT) in 1980 and remained there for a year. "During that period I was exposed to some amazingly good players there like Pat Martino, Robben Ford, Steve Morse, Don Mock, Joe Diorio," he says. "So that had a tremendous influence on my playing and was another turning point in my education."

Through the '80s, Von Doran made a living playing guitar in strictly non-jazz settings while still maintaining his love of jazz. As he explains, "After I left GIT I got out there and started being a working musician, playing in various kinds of Top 40 bands and doing different things to make a living while being a closet jazzer. I was basically playing Top 40 for a living and working on jazz stuff at home but not really ever getting out there and playing jazz on the gig."

In 1986, Von Doran joined the Don Miller big band, which offered him an outlet for playing jazz while also providing him with a steady source of income for the next 16 years. Along with a regular Monday night gig at an upscale restaurant, which lasted 11 years, the Don Miller big band also became the house band for two television shows taping in Hollywood -- "The Nanny" and "Seinfeld." As Matthew explains, "We were the band that played when the audience was coming in. Our job was to keep the vibe going while they were taping. Jerry later flew us out to New York to be the house band for his HBO special he did right after the show ended."

A few years ago, Von Doran began playing in a fusion cover band called New Trio of Doom (a sly insider reference to the Jaco Pastorius-John McLaughlin-Tony Williams Trio of Doom from the late '70s). He changed the name of the group to the Matthew Von Doran Trio a year ago and has been pursuing a career as a jazz artist ever since. And now he's taken a giant step in that direction with In This Present Moment, his auspicious debut as a leader.

• "Von Doran shines throughout this well played showcase...the majors screwed up by letting this be an indie release." - Midwest Record Recap

• "Von Doran’s playing is truly inventive and versatile. This album is well worth a listen for any modern jazz fan." - Bass Guitar Magazine

• "It's nice that a new guitarist who's been around can make a great record, and instill it with his own signature. His playing and compositional skills really come to the forefront on this one. This record should get his name out. And deservedly so." - Vintage Guitar Magazine 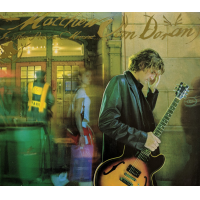 All About Jazz musician pages are maintained by musicians, publicists and trusted members like you. Interested? Tell us why you would like to improve the Matthew Von Doran musician page.