Lester Bowie was one of the most adventurous and proficient manipulators of the trumpet, having made use of everything from strict melodic lines to abstracted explosions of sound. He became a member of the newly- established Association for the Advancement of Creative Musicians, and it was through this he met the musicians with whom he went on to form the radical Art Ensemble of Chicago.

Lester Bowie was born in Frederick, Maryland in 1941, but he was raised in St. Louis, Missouri. His trumpet- playing dad was a high school band director who owned a master's degree, then, not an easy feat for a black man. By age five Lester was taking lessons from a proud father and by 14 he was under the wing of St. Louis trumpeter, Bobby Danzie, who was instrumental in tuning the young Bowie's jazz ears. A year later he was broadcasting and directing his own band. Later he joined the Air Force at 17, and played in ‘after hours’ R&B clubs in Texas.

It was while in the service that Lester began to incorporate elements of his early idol, Louis Armstrong, into his own style of playing. By the time his stint with Uncle Sam's regulars ended, those ears had absorbed Kenny Dorham and Freddie Hubbard , as well. An across-the-river (East St. Louis, Illinois) local kid had further tickled Lester's lobes as Miles Davis ' smoothness crept into Lester's playing.

If you're getting the idea that Lester Bowie is a hybrid, with roots and branches of varying hues, well, you're getting the right idea. But His eclecticism does not stop there. He went on the road with Blues, R&B, circus bands and carnival tent shows, settling back in St. Louis to form a hard-bop group with drummer Phillip Wilson, which included John Chapman on piano. His association with the likes of Oliver Lake, Julius Hemphill, and Floyd LaFlore, led to the formation of the Black Artist Guild (BAG).

Lester landed in Chicago in 1965 with his entire band in his horn and embarked on the obvious next exploration, the so-called “free-jazz” movement. He joined the Association for the Advancement of Creative Musicians (AACM) the following year. As he walked into the room for his first meeting, he was startled to see a passel of musicians the world was not yet ready to take to its bosom: Malachi Favors, Kalaparush Maurice McIntyre, Roscoe Mitchell, and many others. From that not quite chance meeting sprang the Art Ensemble of Chicago, among the most influential and creative groups in modern music: Lester Bowie, (trumpet) Roscoe Mitchell, Joseph Jarman, (woodwinds) Malachi Favors Maghostut, (bass) and eventually, Famoudou Don Moye (percussion).

Moving into the 70's and 80's, Lester's penchant for “serious fun” led him to albums under his own name with titles such as “Rope-A-Dope” (for Muhammad Ali), “Let the Good Times Roll,” “The Great Pretender,” “Its Howdy Doody Time,” and “Miles Davis meets Donald Duck.”

Bowie's various bands have included From the Root to the Source, a sort of gospel/jazz/rock fusion group, and Brass Fantasy, Lester's last band, boasted ten assorted trumpets, trombones, French Horns, tuba and drums. Nothing escaped their repertoire: the free, obscure, standards of decades past, funk, Latin, R&B. Brass Fantasy played them, poked fun at them, but always in good taste. Besides his work as a leader and with the Art Ensemble, Bowie has recorded as a sideman with drummer Jack DeJohnette, percussionist Kahil El'zabar, composer Kip Hanrahan, and saxophonist David Murray. He was also a member of the mid-'80s all-star cooperative the Leaders.

Lester believed in expanding his musical philosophies. In that endeavor, he was a Yale Fellow, and a Visiting professor at Harvard and Dartmouth, as well as a clinician and lecturer. Lester calls it all “avant pop”. In fact, he named an album just that. His philosophy: “All's fair in love and war....and music is both.....so use anything, as long as it works”. Show less

Notes from the Net: Lester Bowie Reissued; Jimmy Cobb's so What Band...

Notes from the Net: A Free Miles Davis Download; a Lester Bowie... 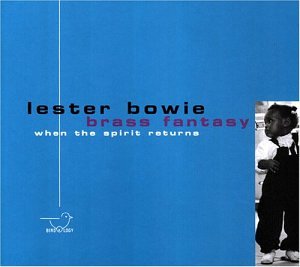 All About Jazz musician pages are maintained by musicians, publicists and trusted members like you. Interested? Tell us why you would like to improve the Lester Bowie musician page.