Jazz drummer Larry Bunker, was an in demand jazz percussionist. He played with many of the jazz greats of the past century.American jazz drummer, vibraphonist, and percussionist, he also played timpani with the Los Angeles Philharmonic orchestra.

Born in Long Beach, California, Bunker was a central figure on the West Coast jazz scene, one of a relative few who actually were from the region. In the 1950s and 1960s he appeared at Howard Rumsey's Lighthouse in Hermosa Beach, and performed with Shorty Rogers and His Giants and others. At first he played primarily drums, but increasingly he focused on vibraphone and was later highly regarded for his playing of timpani and various percussion instruments.

A dependable and in-demand studio drummer and vibist, Bunker achieved particular distinction by recording with Billie Holiday, Ella Fitzgerald, Peggy Lee, and many other jazz greats. In 1952, he was the drummer in one of Art Pepper's first groups. In 1953 and 1954, Bunker played drums in some of the earliest of Gerry Mulligan's groups.

Bunker was also a prolific Hollywood studio musician. He worked on movie soundtracks for 51 years. He played with Henry Mancini on such great soundtracks as Hatari!, Charade, Breakfast at Tiffany's and Peter Gunn. Other credits include Stalag 17, A Boy and His Dog, The Incredibles and The Truth About Cats and Dogs, One From The Heart. Bunker played with the Bill Evans Trio. The band appeared on the TV series BBC Jazz 625. He also appeared with two different bands on the TV series Frankly Jazz.

Larry Bunker was featured along with seven of the west coast ajzz greats on the Mancini soundtrack Hatari!. The opening eight minute Rhino cahse scene has the percussionist playing exocitic African drums and Larry is hear on marimbas, The Sounds of Hatari and on Theme From Hatari follwed on vibes the sexy The Soft Side. 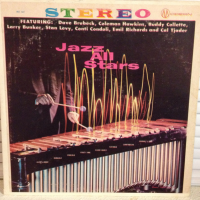 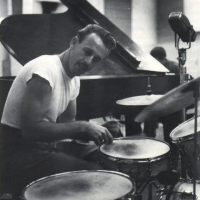 All About Jazz musician pages are maintained by musicians, publicists and trusted members like you. Interested? Tell us why you would like to improve the Eugene Wright musician page.