Bassist Kenny Wright is a native of Baltimore,Maryland. During his career he has performed with Violinst Michael White, Stevie Wonder, ,Roger Collins(You're Lookin' Good'), Oscar Brown Jr ( The Work Song ), Flutist Bobbi Humphrey and others.Known as a strong bandleader, he has opened shows with his own group for Kim Waters, Glady's Knight and Walter Beasley.

Kenny's strong songwriting and producing skills have seen him release three solo CD's that have garnered critical acclaim and have gotten as much airplay around the country as projects done by major studio's.A new CD is set to be released in the spring of 2006. All of Kenny's CD releases have been on digital formats like mp3.com and DMX and have occupied high chart positions getting to #1 several times.

Currently Kenny has been touring Europe ,Africa and Israel as bassist with 'Temptations Revue' featuring Damon Harris and the 'Supremes'. 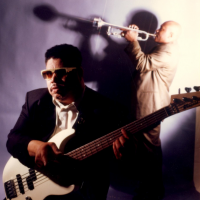 All About Jazz musician pages are maintained by musicians, publicists and trusted members like you. Interested? Tell us why you would like to improve the Kenny Wright musician page.