Kenny Warren (b. Denver, Colorado, 1984), is an American trumpeter and composer. He began studying jazz trumpet at the age of 9, and moved to New York in 2002 to attend the Jazz Conservatory at SUNY Purchase. He has been living in Brooklyn since 2006.

Kenny leads or co-leads the groups “But the Monster is Sick” (with Owen Stewart-Robertson, Dan Peck, and Devin Gray); Laila and Smitty (with Jeremiah Lockwood, Myk Freedman, Josh Meyers, and Carlo Costa); NOOK (with J.P. Schlegelmilch, Jeremy Viner, James Windsor-Wells, and Ben Gallina); Hala Hala (with J.P. Schlegelmilch, Greg Chudzick, and Jeff Davis); Trio (with Will McEvoy, and Flin Van Hemmen). Kenny composes music for all of these groups. 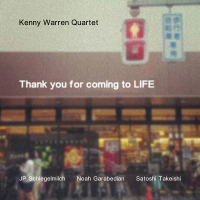 Thank You For Coming...

All About Jazz musician pages are maintained by musicians, publicists and trusted members like you. Interested? Tell us why you would like to improve the Kenny Warren musician page.