Jukka Tolonen is not only Finland's national guitar hero but also one of the world's most respected guitarists. For the past 4 decades, he has captivated audiences through Scandinavia and Europe with his powerful and passionate works. He remains of the the most diverse guitarists of today, being equally proficient in a blues, rock, or fusion jazz environment.

Born in Helsinki in 1952, Tolonen first came to center stage in 1969 when a group of young Finnish musicians merged their collective talents to form the widely popular rock/jazz fusion band Tasavallan Presidentti, who were to record four critically acclaimed albums. During this time, Tolonen also recorded two albums with another well know band Wigwam. These recordings would establish Tolonen as a powerfully explosive and technically spectacular guitarist. However, it would be his soon coming solo recordings that would really turn the music world upon its collective ear. His self titled debut recording, followed by "Summer Games", "The Hook", and "Hysterica" would set new standards for jazz fusion recordings and remain popular world wide even unto today. 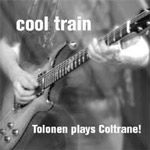 All About Jazz musician pages are maintained by musicians, publicists and trusted members like you. Interested? Tell us why you would like to improve the Jukka Tolonen musician page.