Havana born, US raised, Cuban-American singer/composer HAVANA CARBO, née Gladys Lourdes Margarita Carbo Ramiro Garcia y de la Torre, received her MFA in Music Theatre composition from TSOA/M/T at NYU (‘93) and is a Yip Harburg Fellow. Formerly recorded on Soul Note, later CAP. Carbo now records on MODLmusic, her own label since 1985. At 3 she took to the piano and at 8 began formal lessons in Havana, where she was raised in an environment that celebrated music but viewed “nightclub” performing as inappropriate for a young lady. Jazz established residence in her soul during her NY high school years, but parental scrutiny prevailed, and a brief marriage to a Cuban Economics major she met while at Villanova University in pre-Castro Havana dealt the final blow to her musical pursuits. Twenty odd years, a revolution, three marriages, several moves and four fabulous children later, with life’s experiences as bonus, she created “Havana Midnight”, a successful latin/jazz group in the Berkshires devoted to her arrangements of Latin American classics from her past. A self-produced EP (Another Summer) led to a Soul Note contract, “Street Cries” (1991) with Gene Bertoncini, Michael Moore, Marvin Stamm and John Sauer. Acceptance at NYU’s prestigious Music Theatre Masters program allowed her two wonderful creative years followed by an unsolicited divorce that coincided with her Masters degree. The divorce turned out to be an invaluable gift and the defining moment that prompted her permanent move to New York City to pursue her passion. Her introduction to American popular song and jazz came via Chet Baker, Dinah Washington, Sarah Vaughn, Ella Fitzgerald, Johnny Hartman, Frank Sinatra, June Christy, Mel Tormé, and later Shirley Horn, Maysa, Elis Regina, João Gilberto, Edu Lobo, Ivan Lins and Antonio Carlos “Tom” Jobim. Fascinated by the directness of Brazilian lyrics, incomparable melodies and harmonies, Carbo taught herself Portuguese to better understand the culture, and to do justice to the song. As luck would have it, while searching for lyrics to a song she heard sung by Gilberto called, “Retrato em Branco e Preto,” she was put in contact with its composer, the legendary Jobim, who gave generously of his time on the telephone by clarifying, translating, and answering her questions. Carbo believes that greatness inspires acts of great generosity, most recently displayed by the Oscar winning composer Gabriel Yared, when, as his huge fan she sent him a simple note thanking him for his extraordinary music.

That act eventually led to Yared granting her artistic freedom to record her interpretation of his aria Possesso from his score for the film “Possession”. Her core “Band of Angels” consists of Dario Eskenazi, Vince Cherico. Oriente Lopez, Sean Smith and Leo Traversa. Carbo has also performed /recorded with Cliff Korman, Café, Helio Alves, Edsel Gomez, Aaron Goldberg, John Di Martino, Nilson Matta, El Negro Hernandez, Arturo O’Farrill and the Chico O’Farrill Band, John Benitez, Diego Urcola, Mark Walker, Alain Mallet, Oscar Feldman, Oscar Stagnaro, and the late greats Jimmy Giuffre, Edson Machado and Mercedes Rossy . You can order a “Havana Carbo”, an exotic rum based drink created in her honor, at the Redbones Blues Café, an upscale Supper Club, in Kingston Jamaica. Previous recordings, have garnered glowing reviews from as far as Braga, Portugal to Rio de Janeiro, Brazil, where Arnaldo Desouteiro, La Tribuna wrote that Carbo possesses a “...singularly warm timbre…extraordinary phrasing and stirring expressiveness… and “is destined to develop a cult-following” calling Luna de Varadero “SUBLIME…a perfect CD”. As a result DeSouteiro selected Carbo Best Female Jazz Vocalist of the Year for 2004 and 2007. In addition to composing discrete songs other compositions include a one- act Music Theatre piece, another in progress, and other compositions include “Arco Iris” -a chamber piece in 5 colors for guitar, soprano saxophone and piano premiered at Simon’s Rock, and the Stockbridge Requiem, a latin/jazz/classical setting of the liturgy for the Requiem Mass for organ, full chorus and jazz quintet. Carbo has performed in venues here and abroad, from Birdland to Jazz Festivals in the Caribbean, small Paris boites, concert halls such as Aaron Davis Hall, Gillespie Auditorium, the NY Metropolitan Museum of Art, Berkshire Museum and SOKA University California. Her ever evolving and often entertaining adventures coupled with a typically Cuban ability to find humor in tragedy has given her a deeper insight and greater determination, most recently as a cancer survivor. Every moment informs her music, including her diverse work experiences and the irony and contradictions of her various roles in the worlds she inhabits. Carbo turns lemons into ‘mojitos’ and deals as it comes, allowing life to enrich her understanding of other cultures, languages, stories and songs. Havana continues to write poetry, music, and working on “LIVING BY EAR”, a One-Woman Show based on her adventurous life. She found her home in a community of extraordinary musicians with whom she is proud to work. Nourished by love of music, family and friends she lives in constant awe of the gift that is music and the responsibility that comes with the gift, striving to keep her dream alive and uncompromised. • 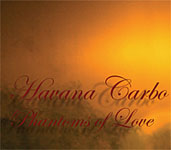 All About Jazz musician pages are maintained by musicians, publicists and trusted members like you. Interested? Tell us why you would like to improve the Havana Carbo musician page.