The two innovators behind Five Corners Quintet, composer, producer and arranger Tuomas Kallio and the band's benevolent svengali and record label manager Antti Eerikäinen initially were simply set out to release a few vinyl singles of stylish jazz music tailored for the dance floor. As the first three vinyl single releases received a huge response among the press and international taste makers and at the same were all sold out, The Five Corners Quintet project slowly evolved into an established and more serious phase. This meant two things: setting up a live band and a CD-album project.

The debut album Chasin' The Jazz Gone By came out in September 2005, spent 11 weeks in the Finnish album TOP-40 chart and has been released in Europe (SonyBMG and Ricky-Tick Records/Timewarp), USA (Milan Entertainment/WEA) and Japan (Columbia International). The album and the vinyl singles preceding it have already sold more than 40.000 copies in total. Not bad for a jazz recording in 2005.

In musical terms the goal of TFCQ is to set an example of how dance floor friendly contemporary production can fruitfully meet the musical craftsmanship of the past, creating music that sounds as hip as the classic jazz records but is at the same time structurally polished and easily accessible music of today. Not housey nu-jazz, but jazz in the classic modernist spirit.

In studio the Five Corners Quintet is a contemporary project dictated by producer Tuomas Kallio and gathering separately the right people for each song from a pool of musicians that are some of the finest players in the Finnish and international jazz scene. Musical production is utilizing both the analog and digital domain, drawing on tools from tape recorders to samplers and sequencers. Even though the final sound and feel is a lot alike, the production approach of TFCQ is thus entirely different from a mid-20th century studio setting.

The Five Corners Quintet performing live is another story. The live band is a phenomenal jazz quintet--or at times a sextet or even bigger--that can appeal both to a critical seated jazz audience and a dancing club crowd. On stage The Five Corners Quintet is a real band featuring the cream of Finnish jazzmen: no machines, no samplers, no DJ's but instead a lot of energy, interaction and world class level of musicianship.

TFCQ received the Japanese ADLIB Magazine International New Star of the Year 2005 award in December and was nominated for the TEOSTO-award in Finland. Three Corners-track was selected as a Gilles Peterson's Worldwide All Winners Cut of 2004 on BBC Radio One while the Chasin' The Jazz Gone By was nominated for best album of 2005.

"...they have the potential to become a major draw on the European Jazz Circuit." --Stuart Nicholson, The Observer, 28.8.2005

"...the players have internalized these historical styles so they can have fun with them. ...the repetitive riffs on Blueprint and Trading Eights are as deep and hooky as anything in dub or techno... thoroughly enjoyable young band." --John L. Walters, The Guardian on TFCQ live at Jazz Cafe 12.09.2005 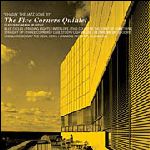 All About Jazz musician pages are maintained by musicians, publicists and trusted members like you. Interested? Tell us why you would like to improve the Five Corners Quintet musician page.