El Gran Combo de Puerto Rico, commonly known as El Gran Combo, is a Puerto Rican Salsa music orchestra. It is Puerto Rico's most successful musical group, and one of Salsa's most famous recording and performing artists across Latin America.

Since many of the genre's legendary singers have been members of the orchestra, the band has been given the moniker La Universidad de la Salsa (The University of Salsa). El Gran Combo was founded by Rafael Ithier in May of 1962. Ithier is still, in 2010, the orchestra's pianist and musical director.

Rafael Ithier had been a member of Rafael Cortijo's "Combo" orchestra, travelling to the eastern United States before forming El Gran Combo. On May 21, 1962, El Gran Combo was heard for the first time on Puerto Rican radio. Later on, they became the on-studio musicians of the live television show, "La Taberna India", sponsored by India Beer.

On November 20, 1963, El Gran Combo released their first group album, “Acangana,” the album became a number one hit in New York, Panama and Puerto Rico. Their success opened them doors in many Latin American markets and they gained an exclusivity spot in Puerto Rican television show El Show de las 12. The album also reached gold status, as did their subsequent releases throughout the ‘60’s. Even with constant personel changes the group continued to flourish and expand their fan base.

Continuing throughout the ‘70’s and well into the New Millennium, El Gran Combo has remained a constant fixture on the salsa scene in Puerto Rico and on the international circuit where they performed for sell out crowds around the world.

In 2002, El Gran Combo celebrated their 40th anniversary with two sold-out concerts at the Ruben Rodriguez Coliseum in Bayamon, Puerto Rico. This celebration spawned a renowned album, “40 Anniversario,” that was recognized as one of the best of the year. A year later, this record received a Grammy for Best Tropical Album.

As of 2010 the orchestra has released over 40 albums and received numerous awards, including a Grammy, Gold Records, a "Calendario de Plata" in Mexico, a "Golden Combo" in Colombia, a "Paoli Award" in their native Puerto Rico, a honorable distinction in Spain and countless others.

Their latest release in 2010 is “Sin Salsa No Hay Paraiso,” (Sony Latin) and the band is still in demand for performances with no signs of slowing down. 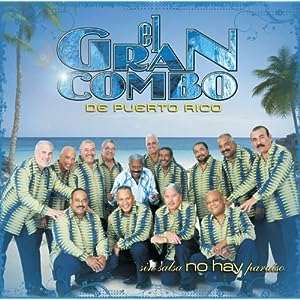 All About Jazz musician pages are maintained by musicians, publicists and trusted members like you. Interested? Tell us why you would like to improve the El Gran Combo musician page.