His journey began with lessons from Lithuanian jazz veterans Oleg Molokojedov and Tomas Kutavičius, followed by Vytautas Labutis, who recognised Domas’ talent and included him in his own groups. By the time he was 18, Domas had already collaborated with the majority of professionals on the Lithuanian jazz stage. While making extensive international connections, in 2018 Domas ended up at a Jazz Workshop summer program at Berklee College of Music with Terri Lyne Carrington and Rick DiMuzio, and eventually has been awarded a full scholarship for his undergraduate studies.

His debut album “Infinite Itinerant”, released in February 2019, showcased his original music, composed and arranged during his teenage years, some tunes dating back to 2015. Along with an abundant team of Lithuanian musicians, including Jonas Drema, Vytautas Labutis, Mindaugas Vadoklis, Liutauras Janušaitis, Eugenijus Kanevičius and others, the album features guest performances from Braxton Cook, Orphée Noah & Will Mallard.

Domas is currently based in Boston, MA where he is pursuing a Professional Music degree at Berklee College of Music.

Read more articles
”the music of Domas Žeromskas is fresh, creative, full of spirit & wonderful musical ideas and his playing shines thru all” ​- Bob James

“the pianist can spin a wild careening lead with the flashiest of young virtuosos, but shows that he's willing to supportively comp behind the sharp horn and guitar soloists as often as he actually steps in front himself.” - Geno Thackara, All About Jazz 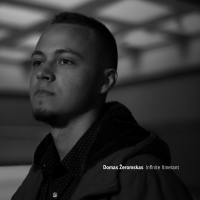 All About Jazz musician pages are maintained by musicians, publicists and trusted members like you. Interested? Tell us why you would like to improve the Domas Žeromskas musician page.