With more than a decade of performing experience since moving to New York City in 2007, Dan Loomis has emerged as a daring leader, a sought-after sideman, and a composer whose view of the world – and willingness to explore his own inner questioning – has led to the creation of innovative and moving works.

Loomis has produced nearly a dozen recordings with the Dan Loomis Quartet and with bands he co- leads, including the collectives SPOKE and The Wee Trio. The latter two bands have released critically acclaimed albums in recent years, including SPOKE’s (r)anthems in 2014, and The Wee Trio’s concert recording Wee+3 in 2017.

In addition to his work on the bass, he’s no less skilled with a pen, having written several commissioned pieces, including a jazz oratorio based on the Book of Job and another based on the final days of Jesus, both commissioned by St. Peter’s Church in New York. He recently formed an ensemble called REVOLUTIONS that uses its music to explore the Haitian and Bolivarian uprisings, and to comment on the world’s continuing need for a revolution of spirit and action. His newest compositional project explores humanity’s interwoven relationship with Trees.

Loomis is also an in-demand sideman. He’s a regular member of The Joel Frahm Trio, with a new album and European tour coming from this group in the spring of 2020. As a member of Vadim Neselovskyi’s trio, which toured extensively around the world, all over NYC including at The Blue Note and Village Vanguard, and recently recorded the music of John Zorn on Zorn’s Book of Beriah release. A small sample of the notable names with whom Loomis has performed includes TS Monk, Gary Burton, Wycliffe Gordon, Ernesto Cervini, Laurence Hobgood, and The Respect Sextet. He’s a regular in all of New York’s major clubs and in addition to appearing on stages across Europe, Canada, Australia, China and throughout the United States.

Last but not least, Loomis is a popular clinician, having spent more than a decade working with students across the United States, Canada and Australia. For more on Dan Loomis’s current projects, recordings and clinics, visit https://www.danloomismusic.com/.

STLJN Interview: Dan Loomis of the Wee Trio on Recording Live at Jazz...

"Oak-tree thick bass" - All About Jazz "Loomis straddles a fine line between understatement and aggression." - Downbeat

Live At the Bistro

From: The Bright Side
By Dan Loomis

From: Job's Trials
By Dan Loomis 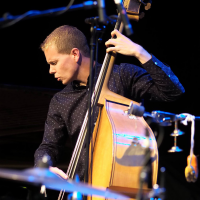 All About Jazz musician pages are maintained by musicians, publicists and trusted members like you. Interested? Tell us why you would like to improve the Dan Loomis musician page.