Christy redefines “classics,” it’s entirely appropriate that she was signed by Chesky Records, an audiophile label that redefines the modern recording process by returning to the earliest recording techniques. Chesky works with artists who are not only great musicians, but who also must be able to stand up to a unique recording process.

Take This Journey was recorded live to two-track over a three-day period at St. Peter’s Church in Manhattan. “On a Chesky recording, one doesn’t have the standard modern-day options,” Christy says. “If you make a mistake, you don’t go back to fix it. There’s no punching in vocals, no overdubs, no compression or EQ.”

“In selecting material, the most important element of a song, for me, is my ability to connect with it emotionally,” Christy says. “The songs I choose need to be able to sustain a jazz treatment, but first and foremost, I have to respect the composer’s and the lyricist’s intention within my interpretation.” Take This Journey includes material by some of Christy’s favorite artists: Stevie Wonder, Carole King, Burt Bacharach and Hal David, and Steven Sondheim, as well as David Finck.

Christy grew up in a musical family – her mother is a pianist and music teacher who recognized Christy’s abilities early on. She sang with her brothers and sisters – six in all – merging their voices. (She now finds herself more influenced by instrumentalists than vocalists, a result of finding her own voice after her early years of trying to merely blend in.) Her parents listened to the pop music of their time, the music of Cole Porter and George Gershwin – music that became standards, and instilled in Christy a reverence for the music of the times, be it music of the 40’s, the 60’s, or the 80’s. By the time she was 16, Christy was performing almost nightly in a club — she was underage, but with the help of her mother, she managed the necessary maneuvers. Her mother had recognized the significance of singing for Christy – as a child, she’d suffered petit mal seizures, seizures that fully abated when she sang. It was inevitable that Christy would pursue a life in the arts, and when she enrolled at Carnegie Mellon University in Pittsburgh, PA, she studied not only music, but also dance and drama. She’s worked as an actress in film, television, and on the stage, (she landed a role in Les Miserables on Broadway, but left when her desire to sing her music overtook her.) And if the words “Wonderful use of iambic pentameter…wameter” sound familiar, it’s because Christy delivered them in her portrayal of a frazzled, baby-talking mommy in a now legendary commercial for Visa. When asked about her two seemingly diverse careers, Christy responds, “I approach both types of performances in a very similar way.” In fact, she likens acting with an ensemble to singing with a band. “The way actors play off each other influences each and every performance – so performances differ every night. You have to really listen to each other and react accordingly... listening makes you a better actor. It’s the same thing when working with a band – You surround yourself with great musicians... really listen... and it makes you a better singer... and because of these ever-varying conversations between artists, each song sounds unique each time we perform it.”

But then again – with Christy, each song is bound to sound unique on any given night. She’s fueled by a passion that can’t be contained, and that passion is guaranteed by Christy’s insistence on performing material to which she’s emotionally linked. Like the songs she’s performing, Christy herself is a classic. Show less

Read more articles
"There's a quality to Baron's singing, an unfiltered honesty that's as refreshing as an early morning snowfall and fulfilling as a heartfelt compliment... Baron lays bare each lyric, exploring the soft folds of ‘Not While I'm Around', the self-delusional satisfaction of ‘The Lies Of Handsome Men', and the crushing despair of ‘A House Is Not A Home' with unilateral finesse." —JazzTimes Magazine

"There's a quality to Baron's singing, an unfiltered honesty that's as refreshing as an early morning snowfall and fulfilling as a heartfelt compliment... Baron lays bare each lyric, exploring the soft folds of ‘Not While I'm Around', the self-delusional satisfaction of ‘The Lies Of Handsome Men', and the crushing despair of ‘A House Is Not A Home' with unilateral finesse." —JazzTimes Magazine

"...A soulful and insightful interpreter of both standards and more recent songs." —LA Jazz Scene

"Our knees turned to butter after a couple of tracks on "Take This Journey"... —Boston Globe

"Christy nails it... The album's highlight, hands down, is Christy's rendition of 'A House Is Not A Home.' This isn't your usual vocal jazz album. It's much more and would be an excellent addition to any collection." —All About Jazz

"The lady has magic in her voice! ...Well versed in the R&B genre... she brings this element into her jazz and standard pop interpretations and it connects better than I've ever heard it connect... She pulls it off so well, enhancing the song she's singing... She gives the finest reading of "House is Not a Home" that these ears have ever heard." —WRTI.org JazzPicks

"While other contemporary jazz vocalists... often overcook interpretations in cabaret schemes (showboating or playing dress-up in Ella or Billie), Baron keeps it honest, making the tunes as much about her band as herself. A worthy journey for those who enjoy vocal jazz that's consistent and fancy-free." —Global Rhythm Magazine

"Why don't more people know of this truly wonderful New York City-area jazz singer who makes the Norah Joneses of the world look like choir girls? ...with a voice that is unerring in its presentation of song. Not only that, but she has a great stage presence that makes a performance seem like a gift instead of a job." —Pittsburgh Tribune-Review

"Thankfully, Baron realizes that great popular music didn't die with Cole Porter, and her ability to find the jazz potential in songs by the Beatles, Bill Withers, and (Stevie) Wonder is a major asset." —CheckOut.com 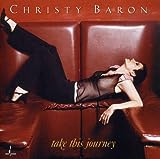 All About Jazz musician pages are maintained by musicians, publicists and trusted members like you. Interested? Tell us why you would like to improve the Christy Baron musician page.