Brenda Earle is a woman on a mission. She is a quadruple threat - a singer/pianist/arranger/composer, who is taking the internation jazz community by storm.

Born and raised in Sarnia, Ontario, Canada Brenda attended York University in Toronto. In 1998, she attended the Banff Centre for the Arts, studying and performing with such jazz luminaries as David Liebman, Kenny Wheeler, Hugh Fraser and Kenny Werner. She has a Master’s in Music from the Manhattan School of Music where she studied with Luciana Souza, Garry Dial and Dave Liebman.

In June 2005, Brenda was won of a few hand-picked performers to attend the Ravinia Festival in Chicago, where she was mentored by all-time greats Nathan Davis, David Baker, Rufus Reid and James Moody. In January 2004, Brenda won the International Sisters in Jazz Competition, a prize that recognized her as one of the world’s top emerging women jazz musicians. This competition culminated in performances at the IAJE conference, where she and the other four winners opened for Nicholas Payton and the Village Vanguard Orchestra. This group headlined the Mary Lou Williams Jazz Festival at the Kennedy Center in Washington, DC. The Washington Post reported on “Earle’s blues-tinted touch and colorful thematic allusions” on the piano and that she “demonstrated her finesse as a vocalist.”

In 2003 and 2005 she was invited to participate in the Betty Carter Jazz Ahead Program which also culminated in performances at the Kennedy Center in Washington, DC. The Washington Post wrote “Among the first to stand out was pianist-singer Brenda Earle, whose talent gracefully bridges jazz and pop.” She was selected for the 2003 Jazz Ahead All-Star group, which performed at the Clifford Brown Jazz Festival in Wilmington, Delaware, opening for Herbie Hancock. In 2002 she was awarded a Chalmers Professional Development Grant from the Ontario Arts Council. She has performed with Dick Oatts, Joel Frahm, Joe Martin, Hugh Fraser, Bobby Sanabria, Sunny Wilkinson and Pat LaBarbera.

August 2005 found Brenda in New Zealand, headlining with her trio at the Christchurch Arts festival and playing sold-out solo concerts at the Taranaki Arts Festival in New Plymouth.

Brenda has been profiled in numerous magazines and periodicals, including the Toronto Star, the Sarnia Observer, the Spill Magazine and jazzreview.com. She spent eight weeks in the “Top Sellers” top ten on jazzpromo.com, and her most recent CD “All She Needs” has received radio play in Australia, Indonesia, Europe and in the US and Canada.

She currently resides in New York City, where everything is happening. Show less 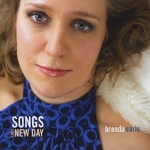 Songs For A New Day

All About Jazz musician pages are maintained by musicians, publicists and trusted members like you. Interested? Tell us why you would like to improve the Brenda Earle musician page.