In the late '60s, restless in Los Angeles, Bonnie moved east to Cambridge, Massachusetts. As a Harvard/Radcliffe student majoring in Social Relations and African Studies, she attended classes and immersed herself in the city's turbulent cultural and political activities. "I couldn't wait to get back to where there were folkies and the antiwar and civil rights movements," she says. "There were so many great music and political scenes going on in the late '60s in Cambridge." Also, she adds, with a laugh, "the ratio of guys to girls at Harvard was four to one, so all of those things were playing in my mind."

Raitt was already deeply involved with folk music and the blues at that time. Exposure to the album Blues at Newport 1963 at age 14 had kindled her interest in blues and slide guitar, and between classes at Harvard she explored these and other styles in local coffeehouse gigs. Three years after entering college, Bonnie left to commit herself full-time to music, and shortly afterward found herself opening for surviving giants of the blues. From Mississippi Fred McDowell, Sippie Wallace, Son House, Muddy Waters, and John Lee Hooker she learned first-hand lessons of life as well as invaluable techniques of performance.

"I'm certain that it was an incredible gift for me to not only be friends with some of the greatest blues people who've ever lived, but to learn how they played, how they sang, how they lived their lives, ran their marriages, and talked to their kids," she says. "I was especially lucky as so many of them are no longer with us."

Word spread quickly of the young redhaired blueswoman, her soulful, unaffected way of singing, and her uncanny insights into blues guitar. Warner Bros. tracked her down, signed her up, and in 1971 released her debut album, Bonnie Raitt. Her interpretations of classic blues by Robert Johnson and Sippie Wallace made a powerful critical impression, but the presence of intriguing tunes by contemporary songwriters, as well as several examples of her own writing, indicated that this artist would not be restricted to any one pigeonhole or style.

Over the next seven years she would record six albums. Give It Up, Takin' My Time, Streetlights, and Home Plate were followed in 1977 by Sweet Forgiveness, which featured her first hit single, a gritty Memphis/R&B arrangement of Del Shannon's Runaway. Three Grammy nominations followed in the 1980s, as she released The Glow, Green Light, and Nine Lives. A compilation of highlights from these Warner Bros. albums (plus two previously unreleased live duets) was released as The Bonnie Raitt Collection in 1990. All of these Warners albums have recently been digitally remastered and re-released.

In between sessions, when not burning highways on tour with her band, she devoted herself to playing benefits and speaking out in support of an array of worthy causes, campaigning to stop the war in Central America; participating in the Sun City anti-apartheid project; performing at the historic 1980 No Nukes concerts at Madison Square Garden; co-founding MUSE (Musicians United for Safe Energy); and working for environmental protection and for the rights of women and Native Americans.

After forging an alliance with Capitol Records in 1989, Bonnie achieved new levels of popular and critical acclaim. She won four Grammy Awards in 1990 three for her Nick of Time album and one for her duet with John Lee Hooker on his breakthrough album, The Healer. Within weeks, Nick of Time shot to number one (it is now certified quintuple platinum). Luck of the Draw (1991, seven-times platinum) brought even more success, firing two hit singles Something to Talk About and I Can't Make You Love Me up the charts, and adding three more Grammys to her shelf. The double-platinum Longing in Their Hearts, released in 1994, featured the hit single Love Sneakin' Up On You and was honored with a Grammy for Best Pop Album. It was followed in 1995 by the live double CD and film Road Tested.

After all the awards and honors and decades of virtually non-stop touring under her belt, Bonnie decided to take a break and enjoy some of the well-earned rewards of life off the road. Spending time biking, hiking, and doing yoga, enjoying family and friends, and traveling for fun instead of work brought her a great sense of renewal and purpose. Of course, she never really went too far away, continuing her activism and guesting on numerous friends' records, including Ruth Brown, Charles Brown, Keb' Mo, Ladysmith Black Mambazo, and Bruce Cockburn, as well as tribute records for Richard Thompson, Lowell George, and Pete Seeger. She picked up another Grammy in 1996 for Best Rock Instrumental Performance for her collaboration on SRV Shuffle from the all-star Tribute to Stevie Ray Vaughan, and continued her dual career, performing with her father, John, in concerts as well as on his Grammy-nominated album, Broadway Legend, released in 1995.

In 1998, she returned to the studio with a new collaborative team to create Fundamental, one of her most exploratory projects, signaling her growing desire to shake things up a bit. Inspired by the music of Zimbabwean world-beat master Oliver Mtukudzi, Bonnie wrote One Belief Away, the first single, with Paul Brady and Dillon O'Brian.

In March of 2000, Bonnie was inducted into the Rock and Roll Hall of Fame; this was followed by her welcome into the Hollywood Bowl Hall of Fame, along with her father, in June 2001. Over the years, Bonnie has appeared as a guest on over 100 album projects, as chronicled in the discography section of her official website. She continues to stretch the boundaries, performing with artists as varied as Cape Verdean singer Cesaria Evora, and legends B.B.King, Tony Bennett, and Willie Nelson.

After the Fundamental tour and more inspirational travel, she went back into the studio with her veteran road band to record Silver Lining, released in 2002. Featuring Bonnie's stunning interpretation of the David Gray-penned title track, the Grammy-nominated Gnawin' On It, and the hit single I Can't Help You Now, Silver Lining was considered by many critics to be one of the best albums of her career. She promoted the album with a lengthy world tour that included her Green Highway Festival and an eco-partnership promoting BioDiesel fuel, the environment, and alternative energy solutions at shows and benefits along the way. In 2003, she released the retrospective The Best of Bonnie Raitt on Capitol.

Raitt also stayed busy with more guest appearances, including the stunning duet Do I Ever Cross Your Mind on Ray Charles’ final release, Genius Loves Company, which won the Grammy award for Album of the Year, and a duet on the Grammy-winning album True Love by Toots & The Maytals. Her 1989 breakthrough album, Nick of Time, was remixed for surround sound, and released by Capitol Records in 2004 as a DVD-Audio, garnering a Grammy nomination in the newly created category, Best Surround Sound Album.

In 2003, she also participated in Martin Scorsese's acclaimed PBS series, The Blues, performing two songs in Wim Wenders' film, The Soul of a Man, and joining the all-star cast of Lightning in a Bottle, the live feature concert film on the Blues directed by Antoine Fuqua. She also contributed songs for two Disney movies, The Country Bears and Home on the Range. Currently, she plays guitar on a track on the new Stevie Wonder album, A Time To Love, and appears in the upcoming TV/DVD tribute, Music l0l: Al Green. A DVD of her 1977 performance at the Montreux Jazz Festival has also just been released. Show less

Bonnie Raitt and Taj Mahal Team up for BonTaj Roulet 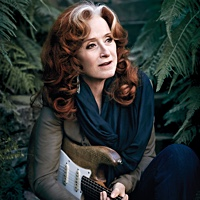 All About Jazz musician pages are maintained by musicians, publicists and trusted members like you. Interested? Tell us why you would like to improve the Bonnie Raitt musician page.