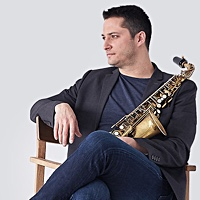 Deschamps and his musicians take us elsewhere, to uncharted territories that music lovers will be delighted to discover.

It was through his classical music background that Benjamin Deschamps discovered jazz to finally make it his own. Although he cumulates artistic mediums (he is a flutist, clarinetist and arranger), it is his talents as a saxophonist and composer that have put him in the spotlight. His gregarious spirit led him to collaborate with several ensembles such as the Rachel Therrien Quintet, Odd Lot (Jacques Kuba Séguin), the Joe Sullivan Big Band, the Orchestre national de jazz de Montréal and JazzLab Orchestra (Effendi) before diving headfirst into his own projects. From trio to sextet, he plays with variable ensemble sizes to give the most fitting touch to each work.

Benjamin is recognized by his peers in the Canadian jazz scene, but also by the cultural industry. He was named “Révélation jazz Radio-Canada” in 2017-2018, and won the TD Grand Prize at the Festival international de Jazz de Montréal in 2019.

As the leader of the No Codes collective, he released in 2018 an album of the same name, his third to date. Ever on the lookout for his next musical venture, he is currently working on a sextet project with a more electric sound, to be released in the fall of 2021.

A New Edition Of Montreal's Festival Jazz En Rafale Under The Theme...

"Again, composition and improvisation, exploration, individuality and tradition are all impressively maintained throughout, which makes No Codes a disc to absolutely die for." —Raul da Gama, The Whole Note

All About Jazz musician pages are maintained by musicians, publicists and trusted members like you. Interested? Tell us why you would like to improve the Benjamin Deschamps musician page.