Atonal Assassin is a masked, multidimensional bassist that has gathered musical skills from alternate realities, to become one of the hardest grooving bassists on the scene today. Atonal’s mission is simple: evolve every piece of music in any genre to its highest, purest, most beautiful form, while preserving music the masters have left everyone throughout space and time.

Before evolving into this form, Atonal has had quite the musical journey- a requirement to understanding as many aspects of music as possible.

On various instruments, and before becoming masked, he’s been able to work with some of the most influential musicians and producers in music, including Eddie Palmieri, Ray Barretto, Tim Gilles, Henry Cole, Giovanni Hidalgo, Suit Of Lights, Alfredo Rodriguez, Papo Vazquez, Ray Santos, and many more, serving as a sideman for 21 years pre pandemic. Atonal’s influences are quite wide, but the majority come from the depth of 8 and 16 bit video games. “Music I listened to 30+ years ago that I can still hum today,” is how he explains it. “I love music from the 70’s- especially anything with a clavé, and electronic jazz, which was called fusion back then, anything from the ECM record label, etc.. and you can hear those influences in the game music I was exposed to in my youth in the 80’s and 90’s.”

Coming from such heavy alternate musical realities, Atonal wanted his basses to have the same versatility, ease of personal tone, and grew frustrated with what was on the market- so he and a close friend built his first “franken- bass;” a passive jazz bass setup from various parts, with a set of NJ4se pickups as its brain. It was alive with not only its own unique tone, but along with a simple passive switch setup, Atonal is able to dial in almost anything he has needed, even bringing his groove to the prime Earth NY/NJ music scene, from places like the Bitter End, to the former Maxwells, even Chris’s Jazz Cafe in Philadelphia, to recording with the very talented Suit Of Lights. “When I need some bite, I can dig in and poof, it’s there. When I want some woody reggae- like beef it’s there. I’ve even been able to dial up p-bass tones using just the front pickup and cranking the tone up! The best part is though, no matter what tone is dialed up, it’s still from this beautiful core, generated by those sweet pups.”

That collection of basses has evolved to include a completely custom hollowbody 51p fretless bass with a 51P4S (Alnico III), with a hybrid sound between upright and electric. Also Atonal’s new “main squeeze,” is a completely custom 4 string fretless, forged by the amazing Mauricio Costa of MG Basses, complete with a custom variant of Nordstrands 3B preamp, with a Big Rig 4 neck pickup, and a Big Split 4 in the bridge position. This bass will be featured in Atonal’s upcoming EP “Video Game Jazz” to be released in 2022, featuring Jarrett Walser on hybrid drums, Steve Myerson on chip tune keyboards, and Carlos “Carly” Maldonado on percussion.

You can catch Atonal performing every last Saturday of the month at the DLV Lounge in Montclair NJ, as well as in many other events as a sideman. As one half of The Fanny Pack, a drummer/bass led ensemble, Atonal and drummer Jarrett Walser feature and back fantastic artists both established and upcoming of all genres, with new video/music releases every month starting in 2022. Atonal is also a producer in the sense of assisting young artists trying to find their personal sound, helping them reach their musical goals and journeys, including producing and educating on the live music recording process. Young Artists such as Matt Gordeuk of FARM, the cybernetic keyboardist, Campblicated, and eclectic drummer Jarrett Walser…

Atonal also has a Twitch channel where he not only plays the games that influenced his music, but also starting in 2022, will host live band concerts, as well as randomized, analog synthesizer jams. 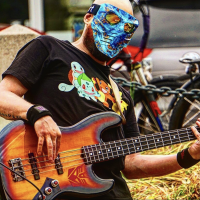 All About Jazz musician pages are maintained by musicians, publicists and trusted members like you. Interested? Tell us why you would like to improve the Atonal Assassin musician page.