The Planck temperature. The temperature at which matter ceases to exist, and conventional physics breaks down. According to Nova, at this point, “strange things, unknown things, begin to happen to phenomena we hold near and dear, like space and time”. Also an apt description for what happens when you mix the cerebral flamboyance of Frank Lacy’s trombone with Andrew Drury’s kaleidoscopic percussion, and the big broad bass sound of Kevin Ray. Rather than focusing upon the more traditional masters – Ellington, Monk, Miles, etc. – this remarkable trio has, in addition to their own compositions, selected a compelling repertoire from some of the less-often played, but powerfully innovative composers and players of modern Jazz. Among these are Sam Rivers, Albert Ayler, Roswell Rudd, Henry Threadgill and Reggie Workman, along with unique takes on Mingus, Strayhorn and Jimi Hendrix. The members of 1032K are most qualified to explore this territory, having worked with a veritable who’s-who of the modern era. McCoy Tyner, Andrew Hill, Julius Hemphill, Sam Rivers, Henry Threadgill, Oliver Lake, Dizzy Gillespie, Abdullah Ibrahim, Bobby Watson, John Hicks, Lester Bowie, Greg Osby, Charles Gayle and the Mingus Big Band are only a partial list of the great artists with whom the members have performed extensively. 1032K offers a delightfully singular and most enjoyable voyage in modern Jazz history, while making a good bit of their own on the way.

Read more articles
”a 21st-century version of fire music,” “this music makes an impact more through the performers' skills than through the written composition.” - Mike Shanley, JazzTimes ”a trio with a deceptively big sound,” “this inventive, high energy debut is an excellent showcase for three talented and adventurous artists,” - Karl Ackermann, All About Jazz ”The sui generis set of skills that each member of 1032K brings to the ensemble leads to an explosive and exciting fusion of talent. The result is this brilliant and near perfect record, a vivid and imaginative masterpiece, that showcases a band at the height of its powers.” - Hrayr Attarian, All About Jazz ”a triumph of musical spirit, engaging, tuneful and deeply felt,” - Stuart Broomer, The NY City Jazz Record ”It's some of the freshest, most compelling music I've received in quite awhile.” - Bob Rogers, taintradio.com “This is one of the best jazz releases I've heard this year.” - George Grella, Brooklyn Rail I 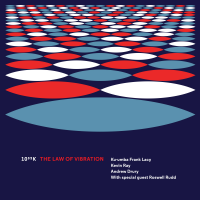 The Law of Vibration

All About Jazz musician pages are maintained by musicians, publicists and trusted members like you. Interested? Tell us why you would like to improve the 1032K musician page.