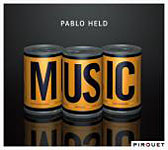 Using the word "music" as an album title can be viewed as a bold and defining statement . . . or a simple word choice. Whether Held wanted to raise some eyebrows here or he was simply choosing an album title doesn't matter . . . but the music does! Held's original works defy easy description. He doesn't write short, snappy heads and songs that are built on predictable harmonic movement, featuring chorus after chorus of solos. His music is freely executed but somehow tethered to an accessible form, function and sound. This is music that remains focused but is, nonetheless, completely unpredictable.

"Encore," an odd song name for an album opener, features some dark cymbal washes from drummer Jonas Burgwinkel. While bassist Robert Landfermann occasionally states the time, the trio usually dances around the beat here. "Desire" is a piano showcase; the drums and bass only arrive at the tail end of the song, giving Landfermann a chance to lock in with Held as they ride to the end. "Log Lady" features some ascending arpeggiated piano patterns. When Landfermann joins in, he shifts the feel of the piece by putting the emphasis on the final note of the arpeggio and Burgwinkel scurries around underneath it all. The title track is built on firmer rhythmic footing than the other material, and the trio really cooks here. Patience is rewarded on "Klartraum," as the three musicians take you on a journey that ends with some aggressive and exciting rock-infused music.

While eight of these pieces are Held originals, he does tap into two of his influences—jazz giant Herbie Hancock and twentieth-century composer Olivier Messiaen. Held skips over the heavily covered Hancock material and chooses "I Have A Dream." Hancock's version, from The Prisoner (Blue Note, 1969), is a gorgeously arranged harmonic bath of textures and colors, but Held delivers something entirely different here. Burgwinkel provides some clicking sounds as the song gets going. Held moves around a bit but chooses to wait more than two minutes to actually introduce the theme and then develop his ideas from that point.

Messiaen seems to be a topic of interest to more and more jazz musicians, judging from "O Sacrum Convivium" here and John Patitucci's intensely grooving "Messiaen's Gumbo" from Remembrance (Concord Jazz, 2009). Gentle tides move in and out on from "O Sacrum Convivium" as Landfermann slowly moves his bow across the bass. Burgwinkel uses his brushes sparingly and only provides the slightest hints of color behind his bandmates.

Held manages to put his own stamp on both of these pieces and they fit in well next to his own compositions. Music proves to be a collection of daring, yet direct, pieces that grow from their initial seeds into fully realized works