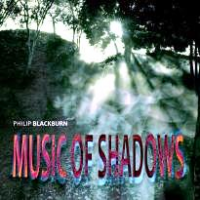 UK native and multi-media artist Phillip Blackburn approaches the musical structures on Music of Shadows as part naturalist, part classical composer and brings the two elements together in an avant-garde narrative. Blackburn's works have been performed in numerous outdoor settings and art galleries as well as on traditional stages. The physical locations of performances are an integral component in his creative process and production as he looks to have his pieces exist as mobile entities rather than static works.

Music of Shadows consists of three long compositions, the lengthiest being the twenty-seven minute opener, "Dry Spell." This piece—and the subsequent "Still Points"—were written with the intent of engineering their playback from the depths of St. Paul, Minnesota's one-hundred and fifty year old labyrinth sewer system. Blackburn's intent was to provide a demonstration of unique and paranormal acoustics in tandem with genre-defying compositions. Played out with a chorus and home-grown musical instruments, the piece is a more compelling musical accomplishment than the description of its mechanics may indicate.

"Still Points" consists of multiple tone melodies generated from a Virtual Rhythmicon, a computerized version of a 1930 electronic musical invention. The piece utilizes an existing electrical power supply to create an angular, pulsing acoustic environment. Rather than the synthetic elements being jarring, Blackburn lets theses sounds wash over the listener as they blend into the more ethereal soundscape. "The Long Day Closes" open with an orchestral flourish and is the most meditative piece of the three, incorporating a human chorus and more traditional instruments.

Blackburn presents a great deal of diversity in the compositions on Music of Shadows. The classical influence in the opening and closing pieces dramatically swell then fall to almost silence, heightened by choruses that are alternatively otherworldly or more grounded in familiar presentation. Blackburn's use of physical spaces and field recordings, ranging from animals to children, is additive. Effectively dividing these two pieces is an ambience that is unusually textured and rich with fluttering effects that merge and land, becoming louder and more insistent like a wind-up toy run amuck. Blackburn creates aural stories though the source of their content and meaning are left open to the imagination and as such Music of Shadows needs to be experienced to appreciate its unique beauty.