By NENAD GEORGIEVSKI
November 26, 2011
Sign in to view read count 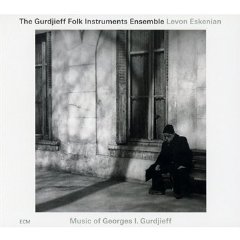 Philosopher, traveler, mystic, spiritual adventurer, teacher, musician and a fervent seeker of esoteric knowledge, The Gurdjieff Folk Instruments Ensemble and his legacy are still of interest to many. His early years shrouded in mystery, he wandered through Central Asia and Middle East while still a young man, absorbing the spiritual and philosophical ideas of the religions he encountered, before making his way to the west, where he began formulating a synthesis (The Forth Way) of what he had learned using a series of sacred dances or movements accompanied by music. Though never an accomplished instrumentalist, Gurdjieff has "composed" around 200 compositions, hummed or sang to one his well-known disciples, renowned Russian pianist Thomas de Hartmann, who wrote them down.

The son of a well-known troubadour, Gurdjieff received some musical training as a choirboy in the cathedral of Kars (today's Turkey), unsuccessfully trying to enter the choir in Tifilis. Despite later being trained as both a physician and priest, it is obvious that, among other things, music had a powerful effect on him from childhood. In the years following Gurdjieff's passing there have been many recordings of his music, based on de Hartman's own recordings and transcripts. ECM has a long history with this music, starting with pianist Keith Jarrett's highly personal interpretations, Sacred Hymns (1980), and including two releases by pianist Vassilis Tsabropoulos and cellist Anja Lechner— Chants, Hymns and Dances (ECM, 2004) and Melos (ECM, 2008).

Armenian composer/musician Levon Eskenian, inspired by Gurdjieff's works and music from the Caucasian region, formed the Gurdjieff Folk Instruments Ensemble and, with the help of this 14-piece group, Music of George I. Gurdjieff reverses Gurdjieff's process by tracing the origins of his melodies back to some of the original songs coming from Eskenian's region and surrounding countries. Eskenian provides the opportunity to experience these tunes as played on original indigenous instruments—such as the Armenian duduk, blul (or nay), oud, saz, tombak and santur—and within the right context, portraying a captivating and exciting range of musical colors and textures. All of the compositions are based on Eskerian's arrangements of de Hartman's transcriptions, with the liner notes providing a detailed description of each composition's origins and mixture of both folk and sacred music. An indicator of both Eskerian and Gurdjieff's broad musical interests, the music is soothing, enchanting and as spare as folk music can be.

In a way, Music of George I. Gurdjieff is more than just music inspired by a certain figure from the past; it is a wonderful introduction to the music of the Armenian region, as well as another entry into the world of Gurdjieff. It opens up the doors to a rich musical world in its full glory and serves as a wonderful document awaiting discovery.

About The Gurdjieff Folk Instruments Ensemble