Fela Anikulapo Kuti: Music Is the Weapon of the Future 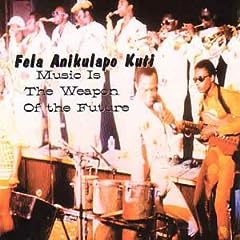 For jazz listeners interested in a portal to African music, there are two obvious routes. One is the spirited South African lyricism of Abdullah Ibrahim and Hugh Masekela. The other is the self-described Afro-beat of Nigerian multi-instrumentalist Fela Kuti. Fela made an enormous number of recordings, and it's very hard to find one which lacks his characteristic inspiration and energy. Fela's music draws upon the rhythmic dynamism of West Africa, the testimonial spirit of East Africa, and New World traditions from America (jazz) and the Caribbean. As a synthesis of styles, it's remarkably successful; the term "Afro-beat" is as close as anyone's come to pinning Fela Kuti down.

On this studio recording released in 1997, Fela joins his usual large ensemble of musicians to deliver three extended pieces which should be familiar to his more avid listeners. The liner notes supply very little information about personnel and the dates of recording, but that is typical of much of his output.

"Go Slow" moves from a walk into a canter, drawing heavily from the energy of funk. A tight horn section delivers a James Brown-styled refrain, leading in and out of extended saxophone solos and vocal interludes. The instrumentals here glow with vitality, typical of this record. This upbeat jam rests in a solid groove and does not travel through many keys. "Rofofo Fight" opens with a gentle rap over ecstatic polyrhythmic drumming.

It's hard here (and elsewhere) to distinguish when Fela is speaking in Yoruba or pidgin English, but his message comes through loud and clear. Like many of his overtly political and humanitarian statements, he cries loudly against violence. (Fela was repeatedly targeted by the Nigerian government and victimized in raids, beatings, and imprisonment.) Finally, with "Suffering and Smiling" he adopts an emphatic pan-African message, drawing attention to the harm that religious imperialism has caused in Africa. At the cost of African welfare, he says, "the Archbishop has much pleasure/the Pope has much enjoyment/Imam has good times."

Nigeria was a very fertile place for musical development in the early '70s, when Fela Kuti first began to receive widespread attention. His vision remained sharp and clear through the next two decades until his untimely death in 1997. He reminded the people of Nigeria (and those of the world) of their common humanity, and he openly questioned the roles of government and other institutions. No wonder the Nigerian government was afraid: over a million people showed up for his funeral procession.

Meanwhile, Fela left us a massive legacy of recordings which testify to truth and love, glowing with spiritual energy and spontaneous group interplay. Listeners with a taste for jazz, funk, and the Afro beat will absorb this music like a sponge.