By GLENN ASTARITA
April 1, 1999
Sign in to view read count 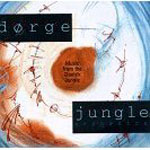 Released in 1996, Music From The Danish Jungle represents a good snapshot of a thriving and ever evolving Danish jazz scene. A haven for American jazz musicians seeking acceptance from audiences during the 1960's and early 1970's, Denmark has stood on firm ground in the jazz arena for many years. Prior to the influx of American jazz musicians, Denmark and Scandinavia alike continue to thrive as guitarist Pierre Dorge & New Jungle Orchestra spawn kaleidoscopic and cheerful arrangements that can often rejuvenate the soul's idle spirits.

Dorge's composition "Ritus Huju #1" features African tribal rhythms, flashy accents from the horn section and clear concise lead guitar work from Dorge. From the onset it is evident that this band pursues thematic development that hinges on African, and at times Caribbean elements coupled with bright, well-stated horn arrangements. On Dorge's "Mango For Mingus" the band creates a subtle Latin vibe with pleasant yet brassy horn charts. The melody line does in fact touch on a typical Charles Mingus small scale horn arrangement; however, digging deeper one can trace an arrangement of this ilk back to Duke Ellington whom of course served as a major inspiration for Mingus. Dorge's "Enigmatic Bird" is a sweet-tempered and engaging composition featuring Jesper Zeuthen's fluent and appealing alto sax work. Here, the mood evokes that of a USA West Coast feel and perhaps reminiscent of the late Oliver Nelson's generally cheerful and resplendent horn arrangements. Keyboardist Irene Becker composed "Autumn in Saltum" which gleefully insinuates a somewhat typical 1960's wall of sound Movie soundtrack. Here, Dorge is in sharp form with some impressive lead guitar work while the brass work evokes vivid images of one of those 1960's British detective or spy movies. This writer imagined James Bond (Sean Connery) cruising the Swiss Alps in his Aston-Martin perhaps enroute to save mankind from sinister forces. Becker's "Kalahari Shuffle" is a toe-tapping rhythmic delight featuring slick guitar work from Dorge, which balances the rather feisty horn arrangements. Bent Clausen's "Give Me A Break" is a light-hearted yet innocent foot stomping rocker with dance hall like brass arrangements from the band.

Throughout this recording there are several somber interludes while a few of these arrangements frequently allude to a modern free-jazz approach; although, these welcome diversions gradually segue into more familiar and contemporary turf.

Music From The Danish Jungle will put a smile on your face. It's clever and loads of fun while the band quickly establishes its own identity from the first track onward. These Danes are on the ball. The rhythmic structures, tight yet upbeat horn arrangements and overall sense of charm makes for an enlightening and entertaining musical experience.