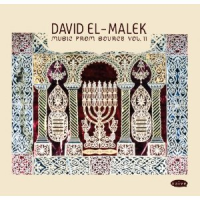 With distant musical worlds drawing closer via technological invention/access and displayed through exploration by innovative composers, it's no surprise that this effort from French-Israeli saxophonist David El-Malek offers highly intriguing music. The music and Israeli-Arab talents under El-Malek's leadership yield a fascinating brew of Middle Eastern-flavored selections mixed with a smattering of Western jazz improvisation

In contrast to El-Malek preceding Music from Source (Harmonia Mundi, 2008), where he fronted a smaller, brass-laden group, Music from Source Vol. II incorporates instrumentation of woodwinds, strings and assorted ethnic rhythm instruments, including oud and tabla, and vocals. The group performs a lengthy and complex array of extended melodies, improvisations, time signature changes and exotic sounds. The compositions meld Jewish, Arabic and other Middle Eastern textures with some traditional Western tonalities, as well.

As might be anticipated with these specific ethnic musical genres, the selections tend to drone on with highly charged melodies over repetitive rhythmic underpinnings. "Awis" commences the date in that exotic fashion. "Hiné Matov" swirls a wind-blown melody with handclapping, with El-Malek's horn dancing. "Tehilim 150," with the last segment "Tehilim," is a five-selection grouping under one title. The haunting vocal entrance brings a mysterious and attractive texture to the piece. "Part II" and "IV" add a more traditional Western string ensemble flavor, while "Part III" brings in the vocal/rhythmic motif.

With "Adon Olam," El-Malek displays a melody of both hope and sadness—an appropriate musical metaphor for an ancient geographical region. His unaccompanied saxophone solo on "Berosh Hachana" is a beautiful, mellow sound-flow. "Adir Hou" merges strings with El-Malek's flittering saxophone in a beautiful chamber-like chorale.

It would be inaccurate to attempt to categorize this effort as jazz. However, there are snips and segments where El-Malek's saxophone or other instruments appear to be stretching out or elaborating over the drone and rhythmic base.

Music from Source Vol. II is, indeed, an acquired taste. While it doesn't break new ground, the ear seems to move the mind's eye through a bazaar of engaging sounds and colorful sights. What El- Malek's music is, is haunting, beautiful, mysterious and serene—all things exotic, all at once. Just like its cultural sources.