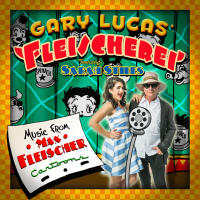 The hip kids knew what to look for in those Saturday morning cartoons. It was the early Warner Brothers' animations and the black-and-white Popeye and Betty Boop cartoons. Insider jokes, stabs at the government and popular figures, and sexual innuendo were commonplace, even if we didn't quite get the meanings. Each were politically incorrect, before there was such a thing as political correctness. You knew you were onto something, and in retrospect the music was the key that unlocked that door.

Enter guitarist Gary Lucas, founder of Gods And Monsters, former member of Captain Beefheart and collaborator with Jeff Buckley. His eternally hip ear has alway been attuned to the subversive lure of soundtracks, releasing Cinefantastique (Northern Spy, 2013) that included covers of Fellini, Hitchcock, and his own soundtrack work for film and television. He assembled his Fleischerei, german for "butcher shop," to present the music of Max Fleischer cartoons. Brooklyn-based Fleischer studios, like West Coast's Warner Brothers was the antithesis to the lily-white productions of Walt Disney. They were The Rolling Stones to Disney's Beatles. Fleischer's music drew from Jewish klezmer, Harlem's Cotton Club and Tim Pan Alley's show tunes, employing artists such as Louis Armstrong, Don Redman, and Cab Calloway.

Stiles' little girl voice disguises the thinly (and sometimes not-so-thin) veiled sexuality of the music. From "Don't Take My Boop-Oop-A-Doop Away" to "Do Something" she resurrects the bawdiness of Vaudeville and Broadway revues. The music of the 1930s permeates here. Popeye's theme opens the ribald "I Want A Clean Shaven Man" as flapper music swings around Lucas' acoustic guitar. The irony of "Penthouse Serenade (When We're Alone)" a song made famous by Nat King Cole, served the depression era spirit. Stiles stretches between the pixie-like Boop to the fickle Olive Oyl. "Beware Of Barnacle Bill" recreates the entire cartoon short as she tries to choose between Popeye and Barnacle Bill. The highlight here is the ear-worm that is "The Broken Record" a recreation of a skipping vinyl piece and a hit song in 1935. Lucas performs it at breakneck speed, Stiles voice cutting and looping dizzily in real time. You may never see cartoons in the same light.

Sweet Betty; Don’t Take My Boop-Oop-A-Doop Away; That’s My Weakness New; I Want A Clean Shaven Man; Penthouse Serenade (When We’re Alone); The Broken Record; The Music Goes Round And Round; Ain’t Cha; Brotherly Love; Little Pal; Do Something; Beware Of Barnacle Bill.