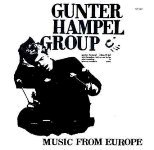 Gunter Hampel (vibraphone, bass clarinet and flute) grew up studying German folk and European classical music. When he was eight he heard Louis Armstrong and jazz for the first time. Though he did not understand a word of English, he felt Armstrong communicating with him. This had an indelible influence and Hampel went on to win several jazz competitions. Hampel became a professional jazz musician in 1958 when he was 21. His ideas moved in a different direction from Armstrong, blowing in the billows of free jazz across Europe.

Given his direction and his innovations, it is not surprising that Hampel drew several musicians into his sphere of influence, including Anthony Braxton. He has performed with Marion Brown, Enrico Rava and Manfred Schoof among a wide range of free jazz votaries. Here he is joined with the young multi-reed player Willem Breuker, who would go on to carve his own indelible niche particularly with his 10 piece ensemble, Kollektief.

Hampel says that this music is designed to communicate. In doing so he opens the floodgates for the musicians, letting them take the written note and expound on it.

Breuker and Hampel are protagonists as well as antagonists. They find a compact terrain in composition as well as the hotbed of intense improvisation. "Assemblage" with seven segments has Hampel's vibes settling into the melody and soaking in without extending the body. That's the calm before the storm as the quartet opens out with Breuker blowing molten lines and Hampel cutting in with undulating notes on the flute. It's raw and earthy, and certainly a pointer to the direction that both Hampel and Breuker would develop and take with them.

"Make Love Not War to Everybody" is divided into four parts. Each lends itself to a different point of performance all rolled into the fabric of free expression. And so the Chinese cymbal is bowed, they raise their voices in wordless song and find solace in the assemblage on the last part which throbs from the deep feeling they bring in.

It was early days for Hampel but his music had more than an element of discovery that made it persuasive.

Assemblage (Suite dedicated to Wolfgang Kopetsch); Heroicredolphysiognomystery; Make Love Not War to Everybody (Piece in 4 Parts).