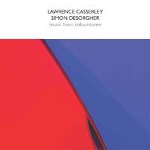 ColourDome is a large inflatable structure, consisting of a series of brightly colored tunnels leading to a central transparent dome, which makes occasional appearances at festivals around Britain. It is almost invariably accompanied by musicians who wander around the tunnels playing their music, being heard throughout the ColourDome. Lawrence Casserley and Simon Desorgher have been performing in the ColourDome since the early 1980s, and co-opt other musicians to join them. Those who have taken up the offer include Evan Parker, Phillipp Wachsmann and David Stevens, all of whom can be heard here.

Given the nature of ColourDome, the music is improvised live but not really in front of an audience, more in amongst a transient audience. Given this, it may not be surprising that the music has an unfocused quality, without many peaks and troughs. That is no criticism; its slowly evolving soundscapes have a tranquil, ambience that is easy on the ear but also capable of springing a surprise at any moment as an unexpected element emerges. This is due in no small part to Casserley himself who electronically processes the instruments, altering and shifting the sounds, and to Stevens, whose credited "computer processing doubtless conceals a huge influence on the resulting music.

The instrumental sounds—flute, violin and soprano sax—that Casserley and Stevens manipulate and process are themselves relatively restrained and episodic. By all accounts, it was a hot summer's day inside the dome when this music was recorded, which surely contributed to the somewhat languorous feel.

Overall, the music seems to acknowledge the reality of the situation, namely that most visitors to ColourDome will be there primarily to experience the structure rather than the music. Hence, the music is careful not to be intrusive or confrontational whilst providing a rather other-worldly soundscape appropriate to the surroundings. Nonetheless, it stands up well on its own, away from the physical experience of ColourDome.