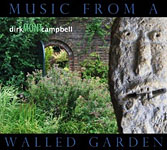 When Mont Campbell—the driving force behind late-1960s British progressive group Egg and musical mentor for its keyboardist, Dave Stewart—emerged from over two decades of obscurity with Music from a Round Tower (ESD, 1997), fans of his earlier work were more than a little puzzled. First, the name change back to his real name, Dirk; without the nickname "Mont," most fans wouldn't have been aware that Round Tower was his. Second, rather than continuing in Egg's rock-centric vein, drawing heavily on classical influences, Round Tower was a world music disc, where the Egypt-born, British musician looked to ethnic instrumentation including the Iranian ney flute, Balkan kaval flute, and Indian bansri flute to create a beautiful album aesthetically closer to longstanding ECM ethnic explorer Stephan Micus.

Music from a Walled Garden—Campbell's long overdue follow-up to Round Tower—is a logical successor, demonstrating not just growth, but clear assurance that Campbell's voice, which helped shape the Canterbury sound of Hatfield and the North and National Health, remains intact and unmistakable.

That's not to say the references are direct. Walled Garden's largely acoustic landscape is distanced from Egg's higher volume, electrified music, despite its similar penchant for irregular meters and episodic composition. Campbell does expand sonically on Round Tower, however, playing more than 50 instruments from around the world and including, this time, a broader array of percussion instruments. Still ethnic in nature, Walled Garden remains a far more ambitious effort; redolent, perhaps, of Campbell's inherent classicism, albeit more deeply subsumed.

Walled Tower is also a sonically denser project that, in contrast to Round Tower's miniatures—only four of its predecessor's twenty tracks exceeded three minutes—is composed of fewer, mostly longer compositions. Like Round Tower, Walled Garden's twelve primary tracks hang together like the 55-minute suite it is, and in contrast to Micus' lighter spirituality, Campbell darker proclivities are asserted from the get-go on the opening, episodic "Afraslab," ranging from drone-driven duduks to dense, dissonant voicings and softer flutes.

It may have only taken Campbell four months to record Walled Garden, as opposed to Round Tower's three years, but it's a far more complex work that, harmonically and structurally, relates more closely to the Campbell of Egg, despite its more inherently organic context. Even the shorter tracks reference greater classicism, with "The Almanac of Azarquiel" a mixture of meters, dynamics, and textures, as Campbell blends flutes, whistles, percussion, clarinet, violin samples, bass duduk, ukulele, kora, zurna, and nyatiti to traverse a broad landscape recalling, on a deeper level, earlier work like the wind quartets on Egg's The Civil Surface (Esoteric, 1974).

While his voice was, perhaps, a little harder to detect on Round Tower, Music from a Walled Garden clearly reflects Campbell's unmistakable vernacular, making it a far more compelling listen. Here's hoping Campbell won't make his fans wait another 12 years for the next installment.