By DEREK TAYLOR
February 27, 2006
Sign in to view read count 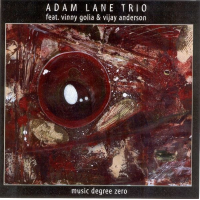 Presenting the balance of a two-day session that yielded the slightly differently titled Zero Degree Music, bassist Adam Lane's latest disc picks up where its predecessor left off. The earlier effort garnered nearly unanimous acclaim last year amongst listeners and critics who heard it. This second plateful upholds the same standards of collective creativity and uncompromising musical immediacy. Lane's stock continues to rise, and he's yet to be associated with album that isn't worth hearing.

In the case of reed multi-instrumentalist Vinny Golia, listeners intimidated by lofty and Braxtonian-sounding Nine Winds projects like the Music for Like Instruments series and A Gift for the Unusual: Music for the Contrabass Saxophone might find this homespun program more hospitable. Here Golia loosens his pony tail and lets his silvery hair down, paring back his closet-sized arsenal to just standard jazz issue tenor and soprano. Lane's compositions and playing are similarly absent of intellectual artifice and clutter.

The trio came to Cadence country to blow, and that's exactly what they do. Lane's pieces provide the open-ended platforms, usually taking flight on muscular bass-rooted vamps. Some programmatic overlap exists with the first outing, but the versions of tunes are distinct enough not to compromise value. When levied against the comparative clout and weight of his colleagues, Anderson is a bit of a second fiddle, but he keeps things moving and grooving behind his kit with a colorful array of propulsive rhythms.

Longer pieces like "Spin with the EARth and "Dance tap liberally into the trio's spiritual reserves. On the former piece in particular, Golia sounds as if he's channeling Joe McPhee, his tenor spooling out tender melodic ribbons that gain velocity and force without relinquishing emotional poignancy or potency. Lane's stout thrums and stops bolster and intensify the drama, exhibiting Sequoia-sized girth and putting lie to the notion of the Spirit Room as a bass-swallowing space. Spin this track as part of a blindfold test and I'd bet more than a couple folks would be fooled into pegging Trio X as its authors.

Shorter pieces like "Running Upsidedown and the closing "To Avenue X celebrate the trio's free bop side. Lane shapes a jaunty speed walking chassis on the first in tandem with Anderson's steady sticks-to-brushes beat as Golia expounds at length through a fast-fingered upper-register workout. On the latter piece a quick count-off leads into an extended bout of expeditiously-rendered blues tenor, the members of the trio swaggering together at their most playful and insouciant. Truthfully, there's not a bum cut in the bunch. Those familiar with Lane and Golia and especially their last offering will probably need no prodding. But anyone with an interest in freer-leaning jazz would do well to hear firsthand what these three players are laying down.

Spin with the EARth; Free; Without Being; Running Upside Down; Dance; Birthday Song; To Avenue X.