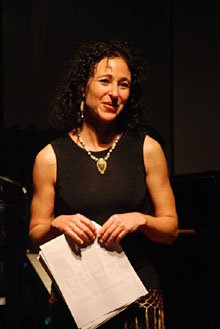 According to Wikipedia, what is called the "salon" originated in Paris in the 17th century. Held in the homes of significant personages, and providing a unique opportunity for women in particular to serve as hostesses and mingle with "society," the early salons brought together high-minded individuals to read and discuss literary works. Over the course of decades, the salons came to include art exhibits and musical performances, so that in the nineteenth and twentieth centuries, the Paris salons provided opportunities for composers to perform their chamber music and for artists such as the impressionists to show new and controversial works. The Paris salons have thus played a crucial role in the evolution of the arts and music during several centuries. Competition to participate in salons became keen, and careers were made or destroyed based upon invitations to them and the responses of the small but influential connoisseurs who were present.

Outside of Paris, salons (other than the ones women go to for a hairdo!) are not that common. Certain salons have played a role in the rich literary scene in Greenwich Village. Doubtless others have been held and are still occurring in various U.S. cities, but one rarely hears of one that is a true creative force. A notable exception is composer Andrea Clearfield's musical salon in Philadelphia.

Held each month in her Center City home, it brings together musicians and other performing artists to provide an eclectic mix of novel and stimulating performances for a small audience of sophisticated music lovers. Clearfield started it more than twenty years ago, and it has been going strong in its own private and sweet way since then. The musicians love it so much that they provide their music gratis, for its sheer enjoyment and for an opportunity to mingle with and listen to other performers on the cutting edge.

This writer heard praise about Clearfield's salons a few years ago from jazz musicians like Tom Lawton, Uri Caine, and Tony Miceli, all of whom have performed there, and from occasional newspaper and magazine articles. (The Salon just won a coveted 2008 "Best of Philly" award from Philadelphia Magazine for "Best Highbrow Fun.") Not much of a socialite, I resisted attending for a long time after I was enrolled on the salon list. I thought stereotypically of such events as ego-feeding opportunities for musical "show and tell," and phony self-flattering intellectual conversation, recalling the devastating words of T.S. Eliot's "Prufrock:" "In the rooms, the women come and go/ Talking of Michaelangelo." Therefore, I wasn't at all enthusiastic about attending them. My impression was dead wrong. After finally getting myself up and out to Clearfield's special "Winter Solstice" holiday Salon, I did a 180 degree turn-around, and am now a convert to what I found to be an astonishing melange of exciting and inspiring performances of every kind of music, with a terrific dance number thrown in for good measure.

The Philadelphia Magazine honors for "best highbrow fun" barely scratches the surface. The salon, as Clearfield arranges and hosts it, provides an opportunity to hear music in its immediate creative foment, and to fully appreciate how musical classifications like "jazz," "classical," "pops," "folk," and so on are insignificant in comparison with the expressive universality of sound and rhythm of all kinds.

Music is simply music, and what really makes it go is its power and ability to communicate ideas and feelings. When you hear, as happened on this particular evening, a string quartet play a Joni Mitchell tune, and a tabla percussion group make their instruments produce coordinated, intense, rapid-fire, sophisticated rhythms and sounds, and a jazz pianist rip apart a Haydn sonata, and on and on, all in one evening, music no longer becomes classifiable. It is simply to be appreciated for whatever direction it takes at any moment. In the hands of such performers, "anything goes," and it goes superbly. They all showed themselves to be emerging masters of what they do. Hemingway referred to Paris as "a moveable feast." Clearfield's salon is a musical feast in a huge, high-ceilinged living room with a balcony and full stage lighting and sound equipment! What a treat! 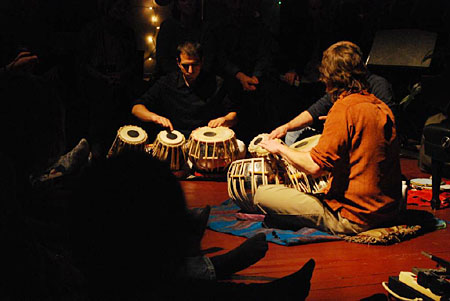 For more details of what went on, I can do no better than to recap Clearfield's program for the evening, with a few comments of my own in italics:

Prelude from the balcony: Melissa Perry, soprano with Hugh Kronrot. (Both traditional and lesser heard Christmas music by a fine soprano.)

Paul Fejko performs holiday improvisations. (Fejko is musical genius, a pianist and composer who studied at Curtis with the likes of Rudolf Serkin; he improvised complex pieces that tore apart the piano and the audience.)

Kenny Ulansey, sax with Paul Butler, clarinet play klezmer and more. (Two wild and crazy guys doing everything imaginable and whose takeoffs on Stravinsky make him into an anachronism.)

Tom Lawton plays solo piano improvisations and deconstructions of Haydn's Sonata in C Major. (Lawton stated the classical theme, and took it into boogie-woogie, hypermodern, and ultra-dissonant grotesque stratospheres that constantly startled and amazed the listeners.)

Michelle Lewis performs original acoustic folk/rock. (A real comer-studied at the prestigious Berklee Conservatory; has a "lost child" style all her own.)

The Salon is held monthly. The performers and the types of music will vary considerably. The suspense about who and what will be involved is part of the excitement, although Clearfield sends the salon-goers an advance email with details of each upcoming program.