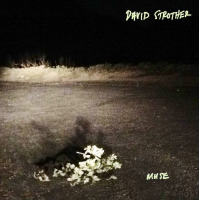 Muse is a poetic suite on loss and resilience by violinist and sound sculptor David Strother. His previous release, Soundings.live (Self-produced), was a lovely integration of improvised violin and Los Angeles street noise, but on Muse he delves into the personal to tell a story through sound. Given Strother's extensive experience with spoken word, it's not surprising that his new recording has a narrative quality: he has collaborated often with noted performance artist Ulysses Jenkins, and he also co-hosts a poetry salon with writer Ricardo Acuna in Glendale, California, accompanying poets with on-the-spot improvisations.

The catalyst for Muse was the death of Strother's mother, a profound loss that was compounded by other unexpected life events. In order to cope with his grief, Strother did what he does best: make music. The seven-part suite starts with "Mi Media Naranja," a raw, primal tune full of echoes and hesitations. Pure emotion quivers through the strings, plaintive and direct, the fragile sounds hovering in space. Then "Love You Forever" delves deep into the ache, revealing the strange beauty of sadness, the kernel of majesty that exists within the greatest sorrow. The flights of the violin echo the flights of the heart, the way feelings plunge and swoop and plunge again. The piece also reflects Strother's creative looping and his ability to create subtle, gossamer effects.

"Violation (The Demon Inside)" is a haunting song, quivering and unsparing. A quiet, steady plucking underlies the tune, providing an undertone that throbs beneath the crash and burn of the strings. "This Phlight Tonight" is full of shivering, shredding palpitations, the violin looping in on itself to create its own backdrop. "Love Bomber" has an echoing urgency that ascends the upper reaches, the distant realms and shuddering high notes that strings access so magnificently, and "Last Night of the Earth Poem" is a short, lovely piece, a brief burst of sorrow that finds the hidden places only poetry can reach.

The album ends with "Healing," a longer tune that integrates the emotions and lessons of the journey. The song proceeds cautiously, the violin trembling with hope as it carefully tests out the new ground. A fine, subtle joy emerges as the piece progresses, a beautiful depiction of the fresh world that appears after one has survived a crisis. The music eventually drifts into a quiet, contented silence, unfolding itself into a wise quietude.

Surely one of the great mysteries of the human heart is its enormous resiliency, and the way that loss can lead to a soulful flowering. It's an enigmatic process that's not easy to capture, but by virtue of Strother's unerring sensitivity, he has created a spare, beautiful work of great depth.