By MARK CORROTO
February 28, 2016
Sign in to view read count 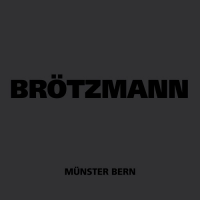 One indisputable fact, there cannot be enough Peter Brötzmann solo recordings in this world. Okay, for those that might disagree, there are a few choice solo Brötzmann sessions that are a must. Count Münster Bern in that category. The saxophonist, a leader of the 1960s European free jazz movement and a Fluxus artist had released several solo studio sessions fifteen and twenty years ago. It has only been recently that he has allowed live dates to filter out. Prior to this date, there were the live recordings Solo + Trio Rome (Les Disques Victo, 2012), Solo At Dobialab (dobialabel, 2012), and Lost And Found (FMP, 2009).

This session from the 2013 Zoom In Festival for improvised music in Switzerland lists the great man playing "reeds." A close listen reveals his volcanic tenor saxophone, lithe alto saxophone, and the taragato. The six pieces here, nearly 68 minutes of music, showcase his free technique, but also each piece seems to find references to a blues sensibility.

The disc opens with "Bushels And Bundles," and his taragato invocation, maybe even call to prayer. Brötzmann exhausts his lungs with the now familiar burly sound, and the piece, which begins as a figurative drawing, blurs and melds into a Willem de Kooning abstract portrait of a woman. In great form, the saxophonist utilizes the performance space (I'm guessing a church) to reverberate notes off the structure on "Crack In The Sidewalks," blowing notes, only to listen to them echo back in an almost call-and-response mode. Again, the bluesy middle passage of this nearly 19 minute piece is strongly heartfelt.

"Move And Separate" begins quietly enough that it could be mistaken for a Jan Garbarek ECM piece, but, of course, Brötzmann changes gears into his overblowing and multi-phonic techniques. The exhaustion of his effort here and with his tenor saxophone on "Chaos Of Human Affairs" is palpable. The encore, "The Very Heart Of Things," opens with a reference to Ornette Coleman's "Lonely Woman," a quite appropriate resolution to this exercise in freedom and the blues.

Bushels And Bundles; Crack In The Sidewalks; Move And Separate; Chaos Of Human Affairs; The Very Heart Of Things.