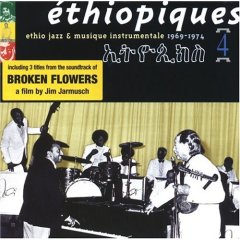 An idiosyncratic amalgam of late 1960s/early 1970s US jazz and jazz-rock refracted through the prism of Ethiopian five-tone scales and harmonies, the early work of composer, keyboardist and bandleader Mulatu Astatqe, the godfather of Ethiopian jazz, has finally edged its way onto the world stage—or more accurately, the celluloid screen.

Following a chance encounter with Ethio Jazz & Musique Instrumentale, movie director Jim Jarmusch included three of the album's tracks on the soundtrack of his 2005 release Broken Flowers. They are the brooding, spectral, groove-based tunes which keep actor Bill Murray company as he drives across America in search of old girlfriends. It's a bewitching sound, and if you see the movie, it will leap out at you.

The album is collection of material recorded by Astatqe in Addis Ababa from 1969-74, and it is very much of its counter and cross-cultural times. Electric guitar by way of Larry Coryell; electric keyboards evoking trumpeter Miles Davis' In A Silent Way (Columbia, 1969); the blissed-out acoustic piano of Alice Coltrane on her albums A Monastic Trio (Impulse!, 1968) and Ptah, The El Daoud (Impulse!, 1970); the early world-music peregrinations of saxophonists John Coltrane and Pharoah Sanders; a little hard bop out of the school of pianist Horace Silver; and occasional blasts of singer James Brown's horn section.

These were all artists whom Astatqe, born 1943, was exposed to in the 1960s, when he studied at music colleges in London, Boston and New York. Returning to Addis Ababa at the end of the decade, he added the magic ingredient which takes his music beyond fusion and gives it a character wholly its own: traditional Ethiopian tonality, with its powerful sense of "otherness."

The disc is compiled from two LPs Astatqe released in Ethiopia in the years immediately following his return from the US—Ethiopian Modern Instrumental Hits (AELP, 1972) and Yekatit: Ethio Jazz (AELP, 1974). Arranged chronologically, the collection tracks Astatqe's journey from recalibrations of US styles to creating something new and singular. If Pharoah Sanders' Tauhid (Impulse!, 1967) was an adventurous and mostly successful attempt at jazz-Egyptology, Astatqe's music is reverse process Ethiopised-jazz.

Track one, "Yekeme Sew" (which translates as a man of experience and wisdom), recorded in 1969, is, like much of Astatqe's music, trippy and unpredictable—a hard bop head-charge, stated conventionally enough by tenor saxophone and trumpet, which is then exploded by raucous, heavily distorted electric guitar and Fender Rhodes solos—yet it's all still essentially out of America. But by track four, "Tezeta" (nostalgia), a re-arrangement of a traditional Ethiopian tune, recorded in 1972, Astatqe is hitting home base. A lovely, velvety ballad, it's a showcase for tenor saxophonist Tesfa-Maryam Kidane, whose extended solo evokes the "exotic" modal explorations of contemporaneous Pharoah Sanders and the breathy romanticism of the older tenor stylist Ben Webster, each reconfigured through Ethiopian scales and harmonies.

By 1974, when most of tracks 7-14 were recorded, Astatqe was on a roll, his cross-cultural synthesis mesmerisingly in place. Yet his music never really caught on in Ethiopia, and jazz—Ethiopian or otherwise—remains a minority taste in the country. Partly this is because it is vocal rather than instrumental music that has always excited most Ethiopians. Partly it is because indigenous forms of improvised, jazz-like, instrumental music, like the shellela style of tenor saxophonist Getatchew Mekurya featured on Ethiopiques 14: Negus Of Ethiopian Sax (Buda Musique, 2003), appeal more readily to traditionally inward-looking Ethiopians.

Whatever the reason, there's some extraordinary music on this album, for anyone with the ears to hear it.