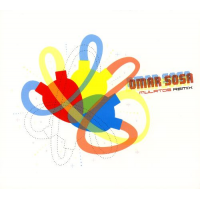 Given the source material for this remix project, expectations will no doubt be running high. Mulatos (Ota, 2004) brought Cuban pianist Omar Sosa's multilateral vision to his broadest international audience to date, earning Grammy and BBC Radio 3 nominations for its warm, flowing sound (as well as a spot on my own short list).

Be prepared to scale back those expectations when you hit play on Mulatos Remix. It's only fair, really. These ten beat-heavy, loopy electronic remixes do a great job at the mix and match thing, bringing colorful instrumental splashes into unexpected juxtaposition, but for the most part they fail to come to life.

That said, I'm sure that people who hear this music in Paris nightclubs and lounges will have no problem enjoying it all night long. But to me, the inorganic and sometimes formulaic approach just seems to be antithetical to the whole spirit of Omar Sosa, who has defined himself as a living, breathing musician who invents his own formula. It's all relative, and you have to be aware of the dangers of expectation, which is part of the lesson here: electronic music is a many-headed beast.

Five mostly Paris-based alternative remixers are responsible for these ten tracks: DJ Basephunk, Doctor L, DJ Spinna, Marque Gilmore, and Steve Argüelles—who also produced both this collection and the original Mulatos. The overall sound falls toward the relaxed, loungey side, but some parts lean more toward hip-hop (like Spinna's boom-bap round on the turntables) or drum-n-bass (Marque Gilmore's two tracks at the end).

You'll want to listen closely to Argüelles' two tracks, which are the hippest and loosest on the disc. They also include outtakes from the original record. These "plush vocal mixes" are the most song-like, not just due to the odd vocal antics on top, but especially because they emphasize melody and return.