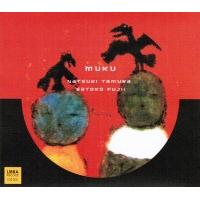 It's surprising that trumpeter Natsuki Tamura and pianist Satoko Fujii—partners in music and life—have only recorded five duet CDs during the course of their incredibly prolific and artistically fecund collaboration. As Fujii wryly explains in her liner notes, each of their duet recordings is different—some are entirely freely improvised, others consist solely of compositions written by either Fujii or Tamura. The location—an important metric in the Fujii/Tamura universe—of each duet recording has also been different. Recorded in New York City, Muku consists of nine steely Tamura compositions played with incredible depth and sensitivity by these master musicians. Tamura's writing is highly concentrated, almost crepuscular—his melodies are brief and poignant, sometimes with a twist or two that might take a few listens to fully appreciate. They also serve as a springboard for evocative improvisations by both parties. Throughout Muku, Fujii and Tamura toy with the concepts of composition and improvisation, often balancing somber, minor key chord progressions with outré extended techniques, as on "In Barcelona, In June." Yet, none of this comes across as an intellectual exercise. In fact, the music's warmth and emotional directness is what makes Muku so appealing.

Pretty much the whole CD moves at a deliberate, conversational pace, allowing the music to "soak in" rather than "happen to." Though somber, thoughtful, and subdued moods prevail, the music has a palpable sense of drama. The duo's affinity for Middle Eastern and Eastern European music is especially evident on "Dune and Star," "In Barcelona, In June," and "Patrol." "Dune and Star" is particularly striking—Tamura's yodeling, muezzin-like trumpet cries out over the tumult of Fujii's dramatic, Don Pullen- informed avant-piano flourishes and clusters. Fujii's lush, gorgeous solo on "Patrol" wanders so far from the piece's original thread that the reintroduction of the jaunty, almost cartoon-like melody comes as a complete surprise. While "Galvanic" and "Clone" revisit the urgent, turbulent, and chaotic sound worlds for which Tamura and Fujii are best known, "In Paris, In February" is as lyrical, warm, and intimate as anything trumpeter Chet Baker ever did.

ADVERTISEMENT
Muku contains some truly stunning, spine-tingling music. The somber, almost melancholic tone of several of the pieces gives the impression that the duo is eulogizing their colleague, bassist Norikatsu Koreyasu, who died shortly before this CD was recorded. Yet, this is not oppressive or heavy music; its sheer beauty and elegance is what lingers the most.