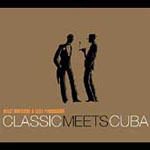 Few musical marriages can seem more oddly matched than a German classical/chamber trio with an Afro-Cuban percussion ensemble. Yet Mozart Meets Cuba presents astonishing work: Latin explorations of Mozart's timeless melodies that are true to the fire and passion, and to the almost mathematic precision, of Afro-Cuban and classical perspectives. Mozart's compositions remain refined and austerely beautiful (such as his Clarinet Concerto, for example, here presented as "Poema Con Cohiba ), but they rhythmically move forward with a smile and bounce.

Bassist Killian Forster, pianist Tobias Forster and drummer Tim Hahn were trained in classical music in Germany. Together they began to explore crossover music by stretching classical music out with important rhythmic, harmonic and improvisatory aspects of jazz, then formed the Klazz Brothers to explore their KLAZZ (KLAssic JaZZ) music. They befriended Afro-Cuban percussionists Elio Rodriguez Luis (congas) and Alexis Herrera Exteves (timbales) while performing in Havana; their combined ensemble constructs a cross-cultural instrumental quintet that moves between classical, jazz and Latin.

Whatever you call it, the members of this quintet play like virtuosos and brilliantly execute Mozart Meets Cuba. Tobias leads the ensemble with piano playing so sparkling and articulate—especially on "Salzburger Schafferl (from The Magic Flute) —that your ears may think you're listening to Dr. Billy Taylor instead. Later, his piano sets the table on "Calypso Facile (from Piano Sonata, K.545) for a finger-popping bass turn served a la mode with percussion.

Added harmonica and trumpet expands "Don Muerte (from Don Giovanni) into cinematic territory with the sound of a sunset closing a classic Western. "Cuban March also takes a bit of liberty with its original ("Turkish March ) to reshape the familiar melody into hot Latin jazz with explosive percussion/piano sections. It serves a great example for the entire Mozart Meets Cuba concept. You hear the familiar classical melody—but essentially as a starting point for genuine, excellent new music based upon its theme.