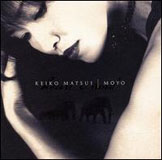 There isn't a great divide between the life of a musician and the ordinary 9-to-5 Joe. Musicians have to perform on their job or they get passed over. They have dandruff, bills to pay and crabgrass they can't get out of their front lawn.

The difference is when a musician undergoes a personal drama there's the outlet of retreating to the nearest studio or soundstage to express his/her joys and sorrows. When pianist Keiko Matsui faced the parting of ways with husband Kazu Matsui, who'd produced all her previous albums, she decided to self-produce—a bold move from an artist with a signature sound carefully crafted over 20 years.

The presence of Masakela, Taylor and saxophonist Gerald Albright is significant. Matsui's recordings for the last decade have been somewhat insular affairs, the only constant being a core trio of her piano, Derek Nakamoto's synthesizers and arrangements, and Kazu Matsui's production and occasional contribution on shakuhachi. Taylor and Albright's saxophones open up the sound here. The subtitle of the album could be Keiko Matsui Plays Well With Others.

All the familiar elements of Matsui's music are here. There's new age, world beat, light classical and contemporary jazz all presented in the East-meets-West fashion that has been a constant since she entered the scene with A Drop of Water. (Shout! Factory, 1987) "After the Rain" is a funky fusion of American smooth jazz as Taylor's soprano saxophone dukes it out with South African soul and Lucas Senyatso's looping bass lines. Taylor, who played with Matsui in the 1990s, and went on to a successful solo career, sounds strong, as if reuniting with his old band mate reinvigorated him as he takes the lead on the radio-friendly "Black River."

"Caricas" is a showpiece for Matsui's playful piano, but gives drummer Rob Watson, Senyatso's rock-solid bass and percussionist Tiale Makhene plenty of space. But it's only an appetizer, with the following "An Evening in Gibraltar" a blue plate special with Masakela's sizzling trumpet trading lines with Matsui's piano during the bridge.

"Um Novo Dia" (A New Day) deserves points for possibly being the most bizarre song on a Matsui album, but features an overly melodramatic vocal by Waldemar Bastos. It's an interesting attempt at Latin music, but comes up short.

Matsui has enjoyed much commercial success and is a staple of smooth jazz programming though she's always followed her own direction rather than comforming to the rules of the genre. Moyo is a fascinating next step in Matsui's growth and advancement as a musician of depth, range, grace and talent.

Moyo (Heart and Soul); A Great Romance; Into the Night; Caricias; An Evening in Gibraltar; When I Close My Eyes; After the Rain; Allure; Black River; Old Potch Road; Um Novo Dia (A New Day); Marula.