By ANYA WASSENBERG
February 2, 2019
Sign in to view read count 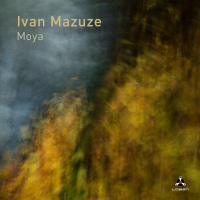 Contemporary Western jazz idioms blend seamlessly with influences that span the globe on Moya by Mozambican-Norwegian multi-instrumentalist and composer Ivan Mazuze. With a cast of collaborators specialized in a range of musical traditions, the results are multi-layered—offering both the familiar and the unfamiliar.

Mazuze's playing is expressive; tone is given as much importance as virtuosity and speed. He composes all the tracks on the release, musically based on elements of various African and Indian musical traditions, with the exception of the text for "Lunde," by Norwegian artist Hanne Tveter.

"Rohingya," the first track, is moody and atmospheric, with layers of African drumming alongside sparkling piano in a minimalist aesthetic. Mazuze's sax ranges from a strident, high wail to sinuous lows, and a melodic middle range in this fluid composition. Improvisational flights bleed into recognizable melody.

Nepalese tabla prodigy Sanskriti Shretsha adds both polyrhythmic percussion and rapid fire vocals to "Mantra," a kinetic track with a soaring soprano sax solo. Olga Konkova's piano trades melodic lines with the sax to a jumpy beat in "Massesa," with solid and inventive work from drummer Raciel Torres. There's a sense of barely contained energy captured in the recording.

The compositions are varied, and each track offers its own approach to the music. "Lunde" blends influences from Norwegian folk music—with vocals written and performed by Hanne Tveter—into jazz rhythms. The liquid guitar solo by Bjørn Vidar Solli is one of the highlights of the album. "Nchisi" is a stand out track, composed with Ibou Cissoko, who plays the kora—a 21-string bridge harp from West Africa—against Mazuze's sax in a polyrhythmic beat.

Ivan Mazuze pushes the boundaries of contemporary jazz to include a variety of influences and sounds beyond its usual borders. Assured and virtuosic playing by Mazuze and his collaborators pull it all together into a kind of global musical language with an accessible and melodic appeal.