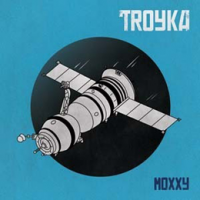 On Moxxy, the funky rhythms and melodies work best when they stay relatively free of electronics. Compared to the band's eponymous 2009 Edition Records debut,