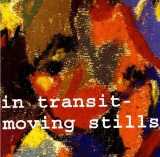 With roots in Ornette Coleman's music, cultivated by Keith Jarrett at his most experimental, Moving Stills branches out into terra incognita.

The musicians here are Swiss, with the exception of well-traveled New York pianist Michael Jefry Stevens. Joining him to make up In Transit are the very talented Jurg Solothurnmann (alto and soprano sax), Daniel Struder (bass) and Dieter Ulrich (drums). The music here is definitely atonal and cutting edge, but, for adventurous listeners, very much worth the listen.

The group, after time together, made the recording in 2004 Europe. In the liner notes, Solothurnmann describes meeting with like-minded musicians and creating "... out of the blue a kind of music never heard before which amazes both us and the listeners." He calls the process "instant composition."

Much of the content resembles conversations on instruments; one starts, the other answers and then the improvisations take off. "Still" is quiet talk, a sax softly ruminating before being joined by piano, with bass and drum unobtrusively nattering in the background.

On the other hand, "Canto Lunatico" is like a shouting match, crashing piano chords competing with the chaotic wail of the sax. The drums come in to further the musical mayhem, aided and abetted by the scraping of piano strings and dissonant bowing of the bass. Stimulating to say the least.

Often a number starts softly, building to a resounding crescendo. This characterizes the fetching dialogue between piano, bass, drum on the brief "Trio."

The chemistry between players is palpable on "Very Spring." Piano and soprano begin a discussion which builds to stirring climax. Stevens' hands pound the keyboard, with Solothurnmann's soprano yelling back. Bass anddrums urge them on.

Some cuts are humorous, as with "Who's Knocking." The soft rapping on drums is incessant, then tentatively answered by a wary piano, not willing to open the door. Likewise, "Underneath" has the bowed bass stealthily proceeding before it is intercepted by the assertive piano-tenor team.

With "Coming and Going," the quartet hits its peak. Starting with what seems a vocal wail, a breathy tenor lament soon starts a lovely refrain, suggesting Coleman's "Lonely Woman." It finishes with the explosive piano, before returning to the soft tenor.

This is improvisation at its zenith. Those willing to listen to this creative work will be rewarded.